2015 Summary of the Shark Fishing Program in Réunion Island

In 2015, a total of 47 sharks were reportedly taken as part of the targeted shark fishing operations on the western coast of Réunion Island (see table below). These are ten sharks less than in the preceding year. Our 2014 summary can be viewed here.

As shown in the diagram below, October was the month with most catches (11).

A 4,20 metres long tiger shark turned out to be the largest shark recorded in last year’s season. The female specimen was caught on a drumline about 600 metres off the beach of Roches Noires in the early morning hours of April 14th. This catch took place during a post-attack procedure in a bid to capture the shark that had attacked and killed a teenage surfer two days before.

On October 22nd, the biggest bull shark was caught in the waters off St-Gilles-les-Bains. It was a female specimen which measured 3,20 metres in length.

A rare catch of a great white shark occurred in St. Paul Bay on October 15th . The male specimen, which measured 3,90 metres in length and approximately 350 kg in weight, was found hooked on a longline deployed about 300 metres from the coast and 16 metres deep.

The great white was still alive but in a very weakened condition. It’s reported that the animal was close to dying. Due to its distressed state and the potential threat posed to the safety of the nearby beaches, the decision was made to land the specimen for scientific examination. 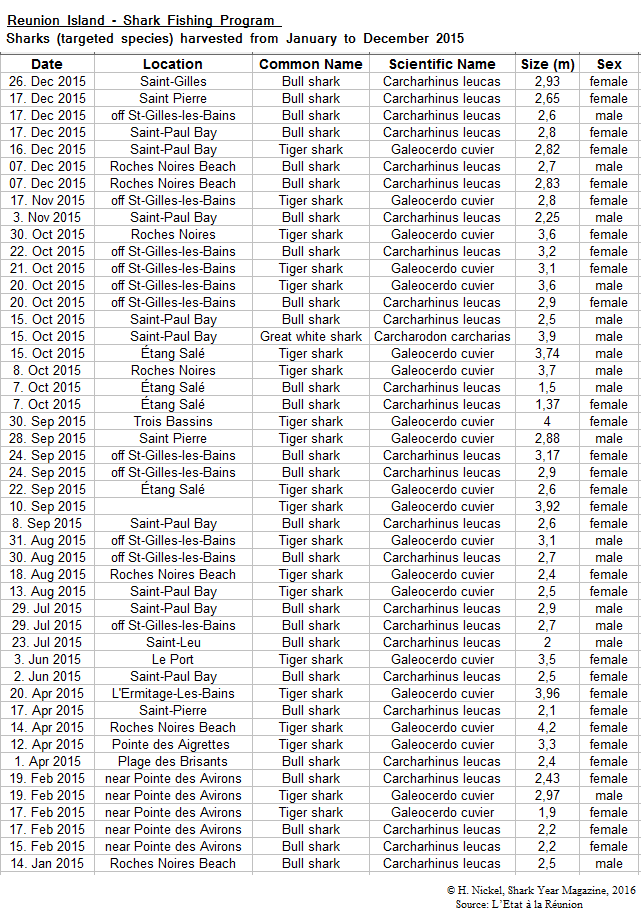