This is an update on the fatal shark attack which occurred on 12. April 2015 off the headland of Pointe des Aigrettes, located close to Saint-Gilles in the commune of Saint-Paul. We already reported on this incident shortly after its occurrence, here.

A forensic medical expertise revealed that the young surfer was attacked by a bull shark (Carcharhinus leucas) with an approximate length of 2,50 metres. The 13-year old victim succumbed to the multiple injuries that he had sustained to his limbs and abdomen.

Elio Canestri is the seventh and youngest victim to be killed in a shark attack in La Réunion since 2011 (see map below). He was a promising talent of the island’s surfing community who had already won the first-place of the ‘benjamin division’ during the 2013 Réunion Surfing Championship (results).

Shortly after the incident on Sunday, authorities ordered several fishing vessels to deploy shark fishing gear in the vicinity of the location where the incident had happened. Over the following days, the defined area was closed to all boating and other maritime activities for security reasons and to optimize the chances of catching sharks which are believed to pose a serious threat to public safety. This post-attack fishing operation ended after 72 hours on Wednesday (15. April) and two shark catches were made, as follows :

The second specimen is one of the largest or even the largest tiger shark ever caught as part of the island’s shark fishing program. We have recently published the ‘2014 Summary of the Shark Fishing Program in Réunion Island’ (see full report here) where the biggest specimen measured slightly smaller with a reported length of 4,02 metres. 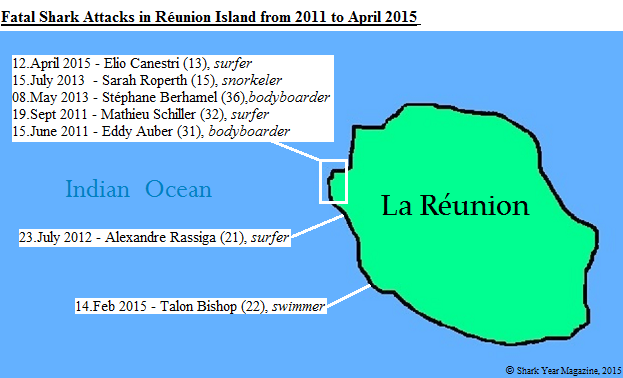