2014 Summary of the Shark Fishing Program in Réunion Island

The following tables and figures are intended to provide an update on the total number of the two targeted species, tiger shark (Galeocerdo cuvier) and bull shark (Carcharhinus leucas), caught from January to December 2014.

According to data obtained mainly from official sources and additionally from local media reports, Réunion’s fishing program harvested a total of 57 individual sharks last year.
Tiger sharks formed the majority of the catch with 42 specimens, and the remaining 15 specimens consisted of bull sharks.

In addition, regarding to the non-targeted shark species, the existing data reveals that at least one hammerhead shark Sphyrna sp. and two sandbar sharks Carcharhinus plumbeus did not survive the fishing process. But it should be noted that the available bycatch-data (other elasmobranch species than tiger and bull sharks ) may be deficient.

All fishing efforts took place exclusively off the island’s western coast with a focus on the waters of the Saint-Paul commune. The fishing gear consisted of baited longlines, drumlines and on few occasions even sportfishing tackle. The deployed drumlines are so-called ‘smart drumlines’ which have been modified with an alarm system to reduce bycatch mortality.

September was the most productive month with 13 ( 10 tiger and 3 bull sharks ) of the 57 specimens sampled by the contractors charged with laying and monitoring of the fishing lines (see figure 1).

The sharks ranged in size from 1,67 to 4,02 metres and occurred in a sex ratio of 32 females and 24 males, with the sex of one individual undetermined.

The largest tiger shark, which measured 4,02 metres long, was caught on a drifting longline off St.Gilles in early November.
In June, the largest bull shark got hooked on a drumline in the waters of Saint Paul Bay. It was a female specimen which measured 3,20 metres in length.
A 1,67 metre long bull shark represents the smallest catch in the 2014 landings. The juvenile shark died on a drumline about one nautical mile off Pointes des Avirons in September.
However, the abundant majority, consisting of almost 80 percent of the 57 sharks taken last year, were relatively large with a reported length of more than 3 metres (see figure 2).
All those specimens were killed and taken for scientific research which is focused on the ciguatera toxin that tends to accumulate in large predatory fish like sharks.

According to the authorities in Réunion Island, a total of 18 tiger sharks and only two large bull sharks were officially tagged and released in 2014 for the local shark monitoring program. More details on those 20 specimens and a selection of elasmobranch-bycatch are given in table 2. But please keep in mind that the bycatch-data ( non-targeted species ) should be regarded as rather incomplete. 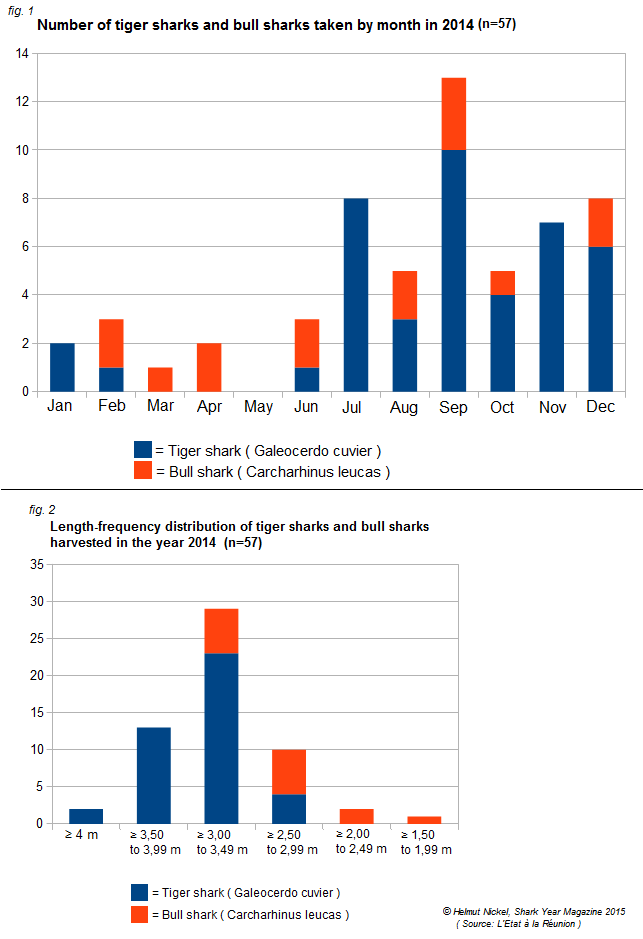