The State Government has released details of the first three weeks of its new drum line initiative, part of a $23million shark hazard mitigation program.

The South-West contractor (who commenced January 25) has caught 23 sharks in total, disposing of 13 tiger sharks over three metres in length, and successfully releasing six smaller sharks.

Since February 1, Department of Fisheries crews operating at the five metropolitan beach sites have caught 43 sharks.  Four tiger sharks have been disposed of, 34 have been released.  Some 28 of these sharks have been tagged with ID tags to assist with research and shark tracking.

In total, 49 sharks were under three metres in length, nine were dead and 40 were released alive. These figures are current as at 6pm, Sunday, February 16.

“We have caught and destroyed a number of large sharks within one kilometre of selected beaches, at a time of year when our beaches are crowded.  This catch data proves there are a large number of big sharks near these beaches,” Mr Baston said.

Both the South-West contractor and the Fisheries crews have been able to successfully release the vast majority (82 per cent) of any sharks under three metres, with no by-catch of other marine species.

“We believe the hook and bait systems we are using are successfully targeting larger sharks and not other fish species, and I commend the crews who have been diligent in releasing as many caught sharks as possible,” the Minister said.

The Fisheries vessel used in metropolitan waters has been modified with a specially constructed ramp and sea water circulation system to ensure sharks smaller than three metres survived.

“The crews try to support the shark while it is being measured, tag it where possible and release the shark out at sea if time allows,” Mr Baston said. 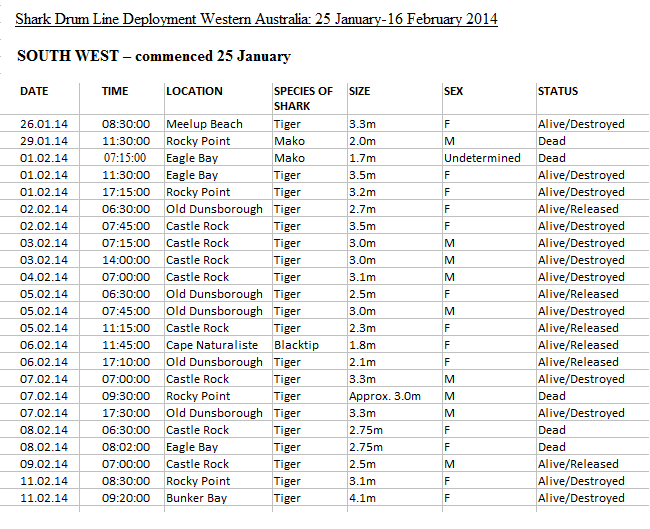