An overview of the Shark Control Program in Queensland with an analysis of the 2013 catch statistics.

The Shark Control Program in the north-eastern Australian state of Queensland is supposed to minimise the threat of shark attack on humans in particular locations. The program was launched in 1962 and it currently relies on over 360 drumlines and 30 nets (see Tab. 3) which offer protection to ca. 80 bathing areas over 320 kilometres of coastline.

In Queensland, the so-called ‘high risk species’ are considered to be the following shark species:

According to local authorities ( in a source published in 2006 ), the hammerhead species has been added to this high risk group, not so much for its proven attack history in Queensland waters, but for its local abundance.

Only non-target shark species are generally released alive upon capture. They are considered to be harmless to humans or released for conservation reasons ( e.g. sandtiger sharks ).

But many other shark species are regarded as a potential threat to humans. They are referred to as ‘target shark species’ and usually euthanized if found alive on the mesh nets or drumlines.

Although other sources say that all smaller specimens of the target sharks (measuring under 2 metres long) are released alive if possible.

Another official publication ( released in 2005 ) provides a more detailed list of the target or ‘to be killed’ sharks in the Queensland Shark Control Program. I am not sure if the list is still valid, but according to this source, the target species are as followed :

Some may be surprised to find the protected great white shark in this list, but even a recently published source ( by the Australian Government in 2013 ) confirms that all white sharks captured in the Queensland Shark Control Program are currently euthanized.

This is a significant contrast to the Shark Meshing Program in the neighbouring state of New South Wales, where white sharks have been released alive whenever possible since 1995.

Over the past 13 years, 82 white sharks were captured by the Shark Control nets and drumlines throughout Queensland ( Fig. 5 ). But there were 2.845 tiger sharks and 1.318 bull sharks caught over the same time-period (Fig. 4) .

Queensland Catch Statistics for the 2013 Season

With over 56 percent of all catches, two of the most dangerous shark species are dominantly represented in this catch statistic. Because tiger sharks were the most commonly caught species (with 248 individuals or ca. 36 percent), followed by bull sharks with 137 individuals (ca. 20 percent).

If the above list of target species is still accurate, only about 21,5 percent ( or 147 specimens ) of all the catches had a realistic chance to be released alive because they belong to the group of the non-target species.

Regarding the target species, 539 sharks were captured of which ca. 55 percent (=294 individuals) measured over 2 metres in length and were most likely killed (see Fig. 2 ).

In the Australian fishing zone, five shark species are currently protected under the Environment Protection and Biodiversity Conservation Act 1999. Three of these species can be found in last year’s catch statistic: It’s the great white, sandtiger and speartooth shark. But their numbers remained extremly low with an overall of only 11 specimens ( including 6 white sharks ) or ca. 1.6 percent of the 686 reported catches in 2013. 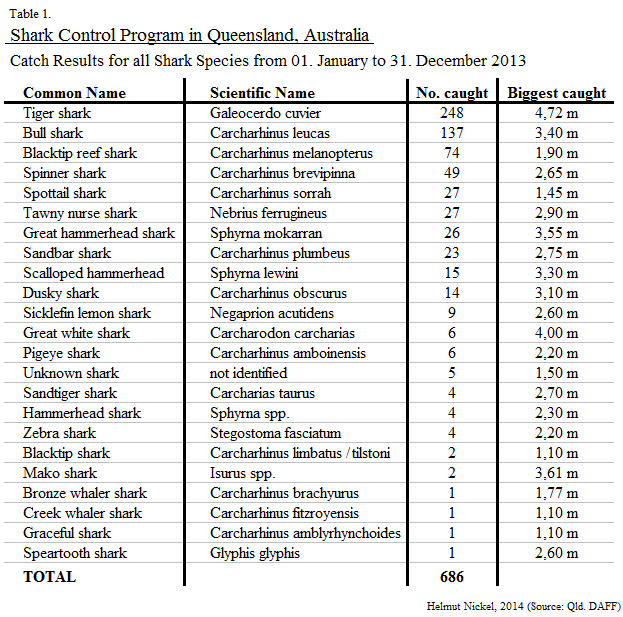 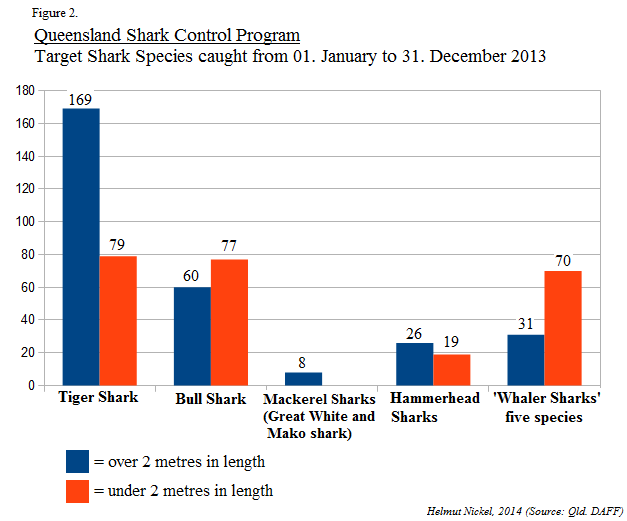 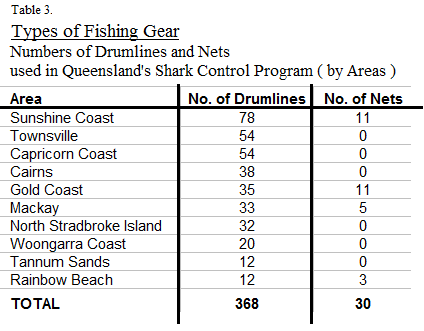 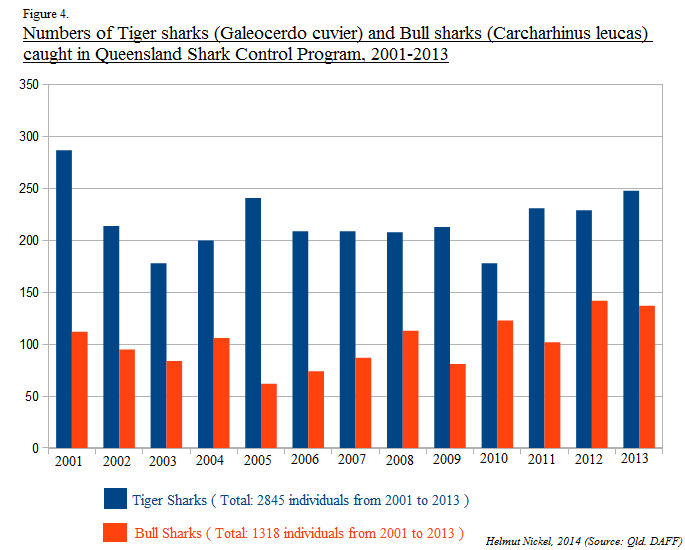 – Australian Government/Department of Environment, March 2005 :
Death or injury to marine species following capture in beach meshing (nets) and drum lines used in Shark Control Programs.
(Advice to the Minister for the Environment and Heritage from the Threatened Species Scientific Committee (TSSC)
on Amendments to the List of Key Threatening Processes under the Environment Protection and Biodiversity Conservation Act 1999 (EPBC Act)

– The State of Queensland, Department of Primary Industries and Fisheries, March 2006 :
A Report on the Queensland Shark Safety Program.