Many people wonder why our information is so much different than the information from the International Shark Attack File (ISAF).

We both start off getting reports of shark attack. We both investigate and confirm the incident happened. At this point the number of attacks is pretty much equal. In 2013 we have reports of 120 incidents while the ISAF investigated 125.

This table will show you how the 125 attacks were divided up in 2013 by the ISAF.

If you minus the “no shark involvement” (6) from the ISAF 125 they have 119 incidents involving sharks while we have 120 we are both even closer.

We ask all ocean goers to use some common sense prior to entering the ocean. Do your own investigation for the area you plan to visit and the activity you plan to participate in. You set your own guidelines for the information that’s important to you and remember only 15% of the world reports shark attacks. 90% of all reported incidents happen at English speaking countries who believe in freedom of the press.

Here is a good example of how the ISAF guidelines might differ from your guidelines.

12/02/2013 – Patrick Briney – Hawaii – *** Fatal *** Patrick was fishing for little baitfish with his feet dangling in the water. Bam big shark rips off his foot and he dies. This incident does not meet the ISAF guidelines so it is not counted in all those fancy graphs, tables, and charts. Persons kayak fishing should take notice don’t dangle your feet in the water while fishing it provokes sharks to attack.

Learn from our experiences we don’t want to add your name to our SAS sites or see you referenced as a number in next year’s summary. 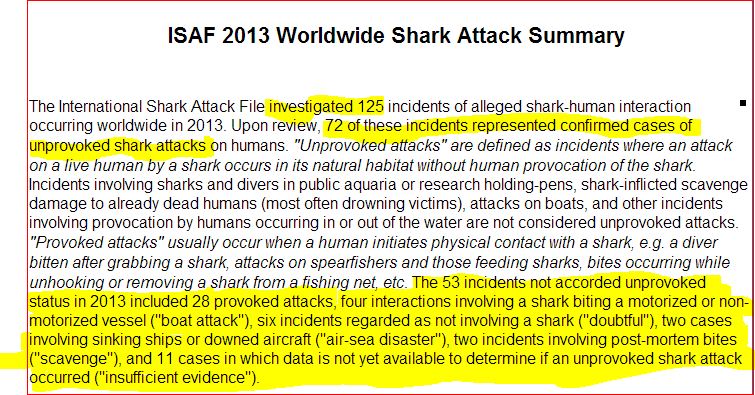 If you should have any questions contact us or contact the ISAF they supply these figures every year. We just made them a little easier to understand.