The person involved in this attack, Marcos González Selayaran 21 years old, was on a surfboard about 200 meters from the coast in an area with an average depth of 3-4 m.

According to his story, he was sitting on the table near by three companions, looking to his left, when he perceived a blow to the back of it and that something turned underwater. Immediately he felt his right foot pulled, tilting it on its side. Felt no pain but instinctively something pulled the leg and foot and he noticed he was bleeding profusely. He knelt on the table, warned his teammates about the presence of a shark and moved quickly toward the shore.

The shark provided minor injuries in his foot and in the ankle, on the ground and inside of the foot, then produced significant edema in the days after the attack (Figure 2).

The treating physician (Mario Cassinelli com.per.1) describes two types of lesions: a punctiform, there are between a separation distance of approximately 5 to 6 mm at the top of the foot and up to 10 mm in the lower giving the impression that the shark introduced around the foot of the victim inside his mouth biting at the instep area and plant.In the latter region, metatarsal – phalangeal level also has puncture wounds, tending to be triangular, arranged in a crescent, the injuries can be assessed by at least three rows of tooth. At that level and on the inner side of the foot, the wounds are linear, comparable to those induced by a scalpel.

The type of attack occurred falls within the so-called “spontaneous attacks” according Baldrige (1974) correspond to the so-called ”attack and escape”.These cases occur near the beaches, where sharks try to capture live fish, the most common attacks. The shark makes an attack, the victim let go and leave the area. The attacks typically involve the legs and feet, resulting in minor injuries, which in rare cases become fatal.

The young man could not observe shape, size or color of the animal abuser. Notwithstanding this, claimed to have seen a lot of mullets (Mugilspp.) very close to him.

The identification of the animal abuser is difficult, especially because the victim could not see the shark and there was no loss of teeth recovered after the attack, elements of diagnostic value as to make a reliable identification. However, based on the traces resulting from the bite and the available literature (Compagno, 1984; Luciforaet al, 2001;Lowry et al, 2002) is possible to attribute the attack to a Sand tiger shark (Carcharias taurus). Despite of this species are mainly ichthyophagous, is recognized as one of the four most common species involved in attacks on humans (Burgess, 2003).

The distance between some consecutive wounds (5-6 mm) and the evidence that the shark introduced around the foot of the victim inside his mouth allow us to infer that it was a shark of 1.5 to 2 meters in length.

In Uruguay had not been documented so far such accidents, however there have been attacks on sea lions near Isla de Lobos and the islands of Cabo Polonio, where it was found mutilation of juveniles and adults fur seals(Vaz- Ferreira, 1969), although not attributable to this species.

Di Candia, 2004,reported, without exact date, at least two accidents that have occurred during the first third of the twentieth century. The first accident occur in front of a place called Isla Chica of La Paloma(34° 39′ 46.01”, 54° 08′ 59.10”) where a swimmer was bitten on one foot , losing a piece of bead (Pagolain Di Candia op cit ) .

Meanwhile Praderi (1985) refers to as Carcharias taurus and Notorhynchus cepedianus as the two most aggressive species in the attacks made ​​to river plate dolphin (Pontoporia blanivillei).

It should be noted that of the 45 shark species listed in Uruguayan waters (Paesch&Meneses, 2003), 19 of them have been involved in attacks on humans in other parts of the world. 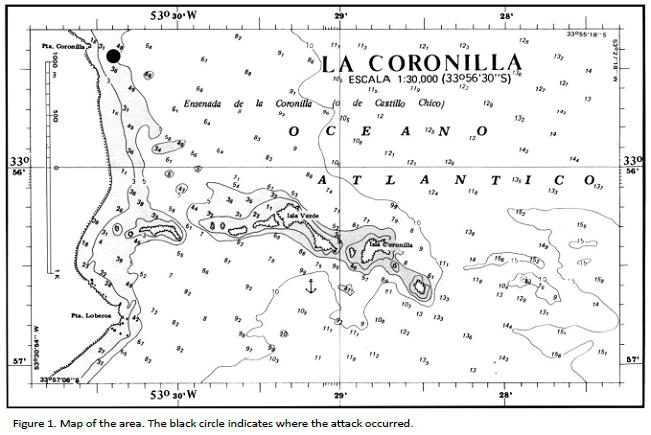 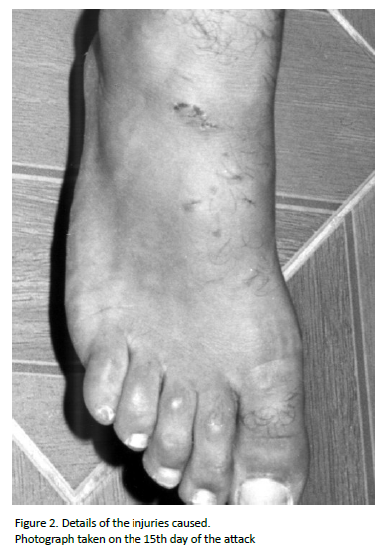