AN EAST London surfer is lucky to be alive after a shark bit a chunk out of his board at Queensberry Bay.

Kevin Bracey suffered minor lacerations around his knee when the shark attacked him while he was paddling out with a friend, Dave Boatwright, for a surf on Sunday morning.

Marine experts yesterday warned surfers and bathers to be cautious when entering the water along the East Coast after reports of bird, shark and other marine activity associated with the annual sardine run to KwaZulu-Natal.

Boatwright said the two were paddling out a few metres apart when he noticed a “big swirl” in the water before Bracey shouted out he thought he had been bitten on the leg by a shark.

“It all happened so quickly, one minute we were paddling out, the next Kevin said he thought he had been chowed [bitten],” Boatwright explained. “Everything was going on in slow motion … Kevin’s face was white when he realised the fin of his board saved him from getting his leg bitten off.” Boatwright said one of the three fins on Bracey’s board prevented the shark from clamping down on his leg.

A bleeding Bracey and Boatwright caught a wave to shore fearing the worst. “He was very lucky, he had a few nicks around his knee and huge chunk out of his board.”

A chunk of foam measuring 20cm by 28cm was missing from the board.

Local surfer and former world tour campaigner Greg Emslie – who arrived soon after the attack – said both surfers were shivering on the beach when he got there.

Emslie said the scary part was that they did not realise there was a shark about – until it bit the board.

Emslie and fellow professional Roseanne Hodge had a close call at Queensberry two years ago when a shark buzzed them in the line-up.

Several attempts to get comment from Bracey yesterday proved fruitless. 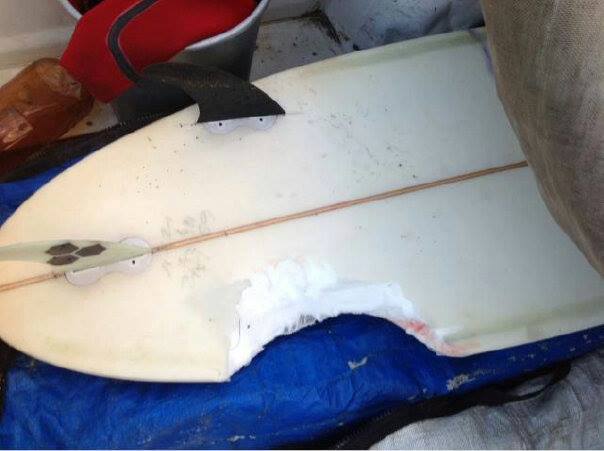