New Zealand police shot at a shark which attacked and killed a person at Auckland’s Muriwai Beach on Wednesday afternoon. 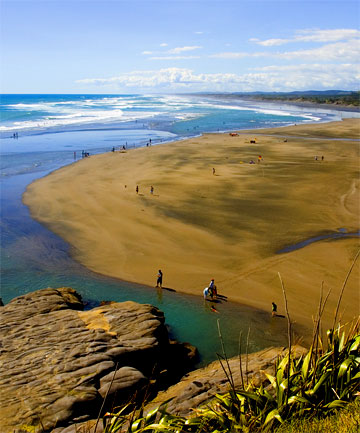 The attack happened just before 2pm local time, a person from the Muriwai Surf school, who did not want to be named, said.

A staff member at Sand Dunz dairy said people coming into the premises were “speechless”.

“I’m shaking, I don’t really want to talk about it,” the shop assistant, who didn’t want to be named, said. “Everyone’s speechless.”

The beach was crowded with children from Glen Eden Intermediate and Avondale College, a Fairfax reporter on the scene said.

Auckland City Council said the beach had been closed for the day.

There have been 14 known fatal shark attacks in New Zealand, since records began about 1837, according to Department of Conservation shark expert, Clinton Duffy.

“In the last 20 years we have been averaging two shark incidents, where the shark actually bites someone, a year.”

“Those are generally on swimmers and generally result in fairly superficial flesh wounds,” Duffy said.

Global shark attacks have increased every decade since 1900. Last year’s 12 fatalities, three in Australia, was almost three times the average of 4.3 from 2001 to 2010, according to the International Shark Attack File.

There are more than 60 shark species that come to New Zealand waters. The majority are little-known species that live deep below the ocean surface.
Read more: http://www.brisbanetimes.com.au