A 26-year-old worker of the Ashdod Port fishing cages was bitten by a shark on Sunday. The man was bitten at sea while putting his hand in the waters, and was rescued and taken to the port, where he received medical care by Magen David Adom emergency services.

MDA reported that the man suffers from serious wounds to the entire forearm and is in moderate condition. He was evacuated to the Tel Aviv Sourasky Medical Center.

The man is a diver who took part in underwater work with another diver seven kilometers (4.3 miles) offshore. Kelly Peretz, an MDA paramedic who treated him said: “We understood he was working with another friend when a shark popped up suddenly, bit him in the arm and left. His friend pulled him out of the water and brought him by boat to the shore.”

Kelly added that the diver suffered injuries to his forearm down to his palm but was in full consciousness, “he cooperated and answered questions.”

This is not the first time a shark has been found in the vicinity of the Ashdod Port or Israeli beaches. Last April, two fishermen accidentally fished a 60-kg (132 lbs) shark out of the water.

Itay Blumenthal contributed to this report 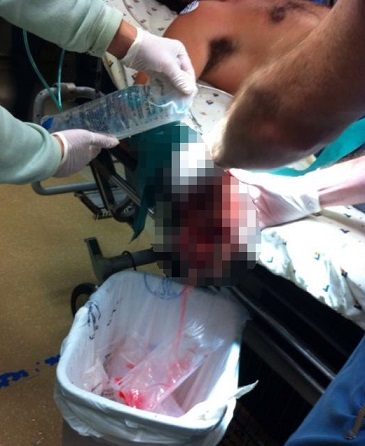