The 316kg animal had a satellite tag attached to its dorsal fin.

A GREAT white shark was caught on a drum line at Sunwich Port, near Port Shepstone yesterday (Thursday). The animal was 3.1m in length and weighed in at 316kg. The shark was taken to the  Sharks Board’s headquarters at Umhlanga.

Sheldon Dudley, chief scientist at the Sharks Board, said the shark was found by its Pumula base staff at about 6am, during routine early morning checks. “The shark had been satellite tagged on  it its dorsal fin.  This tagging was done by South African researchers with the assistance of Ocearch, a US based organisation that had funded the research, and provided the satellite tags and a research ship to attach the tags to the sharks,” he said.

Mr Dudley added that there are between 20 and 30 sharks caught  in shark nets and by drum lines each year. “The advantage of drum lines, which are  large, anchored floats from which a single baited hook is suspended, is that, unlike sharks nets, they do not catch a lot of other animals,  such as  dolphins, turtles and rays.”

Most of the shark nets deployed by the KZNSB are 214m long and 6m deep and are secured at each end by two 35 kg anchors; all have a stretched mesh of 51 cm.  The nets are laid in two parallel rows approximately 400m offshore and in water depths of 10-14m. Most beaches are protected either by two nets or one net and four drum lines, but this varies from beach to beach. 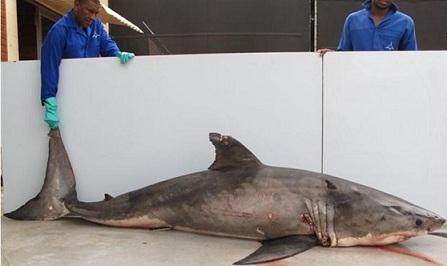