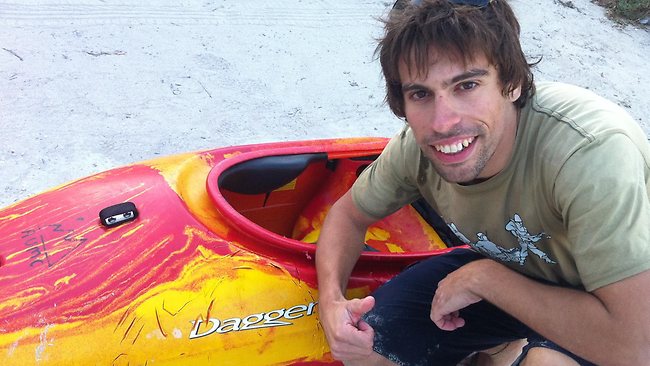 Shark attack survivor Michael Demasi with his damaged kayak.
TEENAGE adventurer Elise Lavers has been hailed as a hero and her friend Michael Demasi one of the luckiest men alive.

The pair survived a kayaking clash with a 6m great white shark off the Yorke Peninsula.

The drama in Dolphin Bay, in Innes National Park, unfolded late on Wednesday when the friends went kayaking, unaware the calm bay was a known haunt for large sharks.

Mr Demasi, 27, has a small wound on his thigh where the shark pierced his plastic kayak when it bit into it in 40m-deep water.

The Flinders University student thought he had been washed on to rocks by a wave and bailed out of his kayak, only to turn around and see the huge shark treating his boat like a chew toy.

“The shark bit into my thigh and was violently jerking the kayak,” he said.

“I didn’t know it was a shark so I was relaxed enough to grab my sunnies as I bailed out.

“It wasn’t until I came up from the water when I saw a big thing gnawing the kayak.

“It had brought its head out of the water to grab the kayak.”

Miss Lavers, 19, having seen the shark, raced to his rescue in her kayak. “Elise saw the whole thing … she didn’t know if I’d been hurt,” Mr Demasi said. “She paddled over and I grabbed the back of her kayak.

“I wouldn’t have been able to swim fast enough.”

Ms Lavers paddled them both to the cliffs, where they took refuge until help came. A passing boat plucked them from the cliff and later retrieved the damaged kayak.

“We just started laughing at the shark trying to eat the kayak,” Mr Demasi recalled. Ms Laver, also a Flinders University student, told her father Keith about the event.

“She was in awe to see this massive creature launch itself out of the water and grab the kayak,” Mr Lavers said. “It was pretty cool how she quickly got (Mr Demasi) on the back of the kayak and out of the water.”

A friend, who did not wish to be named, said it sounded exactly like the sort of thing Miss Lavers would do.

“It comes as no surprise that she saved the day,” the friend said.

The shark left a 40cm-wide bite mark in the kayak and the skipper of a nearby fishing boat estimated the shark at up to 6m because it was bigger than his boat as it circled it.

The pair returned home from the trip yesterday with the damaged kayak.