By: Helmut|Published on: May 26, 2012|Categories: Shark Attacks - Related Incidents| 1 comment

HONOLULU (HawaiiNewsNow) – Jerry Gallardo was kayaking with his father Sunday morning. They were bottom fishing off Iroquois Point at one of their favorite spots.

Two miles out in 80 feet of water a tiger shark bit down on their kayak, inches from Gallardo’s right hand.

“I could see the nose. I could really touch it like this. The shark was there. There’s a good ten seconds that it was swinging its tail,” he said.

The surprise attack froze him for a second.

“I didn’t know what to do. Luckily, my dad, Dennis, whacked it with a pole. It got hurt and swam away,” he said.

The shark didn’t rip out a chunk but left a track of teeth marks imbedded in the kayak’s body. Gallardo thinks it was eight or nine feet long.

“Luckily, we had the amas on the side, so it didn’t tip. if we didn’t have that we would have tipped and fell over,” he said.

Gallardo and his father shook it off and stayed in the water.

“Drove the kayak out of that spot and went to shallower water, 30 or 40 feet and still bottom fished,” he said. 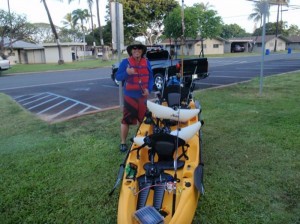 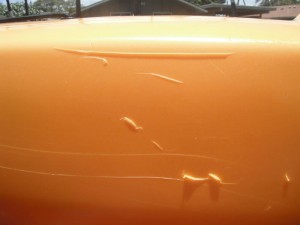