Authorities have closed two beaches in Sydney’s north after a shark tried to attack a surfer and took a bite of his surfboard.

Long Reef and Dee Why beaches have been closed after a 2.5-metre shark reportedly knocked into an off-duty lifeguard’s long board while he was in the water this afternoon.

There are no reports of injuries.

Lifeguards closed the beaches after spotting what they believe was a shark.

Danny Sheather, 23, told Nine News he was on top of a wave surfing with his mates when his board was struck from below.

“I felt a big hit from under me and then it kind of knocked me off my feet,” the Warringah Council lifeguard said.

A 15cm gash in a surfboard believed to have been made by a shark.

Mr Sheather said when he reached the beach he noticed a “decent gash” on the bottom of his surfboard.

“I showed my mate who’s a life guard and he’s like ‘yeah, it’s a shark for sure’,” Mr Sheather said.

He said he was left shocked by the incident – his only suspected brush with a shark in 18 years of surfing.

Lifeguards scoured the water in rubber duckies after the incident and the Westpac rescue helicopter arrived an hour later to scan the area from above.

The Westpac helicopter reports the shark has continued to ‘surf’ behind the waves along the stretch of beach and authorities were trying to move it away.

A lifesaver who did not give his name told the Daily Telegraph that although Mr Sheather did not see the shark the encounter was being taken seriously.

Danny Sheather talks to a lifeguard.

“It’s an unusual gash in the board and there’ no obvious debris in the water to explain him hitting a bit of wood or something,” he said. 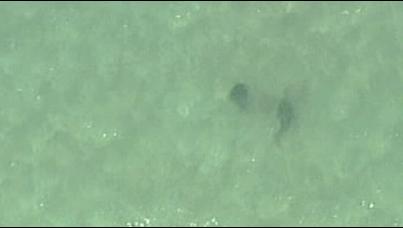 An aerial view of the suspected shark in off Northern Sydney