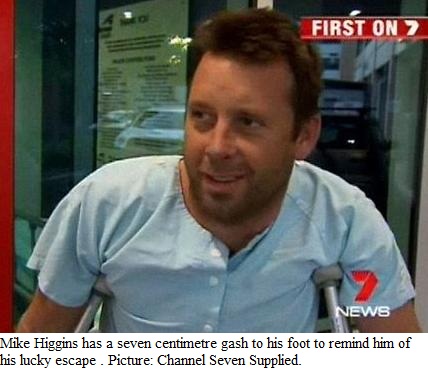 AN OCEAN Grove surfer will have a tall tale to tell after surviving a brush with a 1.5metre shark yesterday.

The 42-year-old was surfing with friends at Port Campbell yesterday morning when he was attacked by the shark.

He felt something brush against him in the water and turned to find the shark latched onto his foot.

Incredibly, he managed to free himself from the shark, with the unknown species leaving just a 7cm gash to the man’s right foot.

It’s not the first time people have been attacked by sharks along the coastline, but according to Life Saving Victoria, it is a rare occurrence.

”There’s plenty of sharks down there but the incidence of shark attack is very rarely reported,” club development general manager Paul Shannon said.

”You always hear the surfer stories that there’s a shark in the water but for this guy, luckily, it’s just a good story to tell the grandkids.”

The man was driven by a friend to Timboon Hospital before being transported to Geelong.

He was all smiles as he was wheeled into Geelong Hospital for surgery to the gash on his right foot.

A Geelong Hospital spokesperson said he was expected to be discharged overnight.

Shark attacks along the Surf Coast are certainly rare but not unheard of.

In 2010, Barwon Heads doctor Pat Lockie was bitten on his right hand by a shark while he was surfing just 100m offshore from Thirteenth Beach.

A shark also attacked surfer Peter Galvin in 2006 at Winkipop, near Bells Beach, resulting in the man bleeding from deep lacerations to his left leg.

He still had a tooth lodged in his wetsuit when he was pulled from surf.

According to Australian Geographic, there are a number of ways to avoid a shark attack, including:

* Swim at beaches that are patrolled by surf life savers;

* Do not wear shiny swimwear or accessories and try to wear bland, darker colours;

* Do not swim in cloudy or turbid water;

* Don’t swim near drop-offs to deeper water or river mouths; and

* Avoid swimming or surfing at dawn, dusk or night.

Sharks are just as prevalent in the winter months as they are over summer.

”Effectively they are there all the time, doesn’t matter whether it’s warm, cold, or whether it’s a patrolled beach or not patrolled,” Mr Shannon said.

There have been just 10 fatalities on record from shark attacks in Victoria, with the most recent death occurring in 1977 on the Mornington Peninsula.