A NEWCASTLE ambulance officer was lucky to escape injury after being knocked from his ocean racing ski by a great white shark on Sunday. 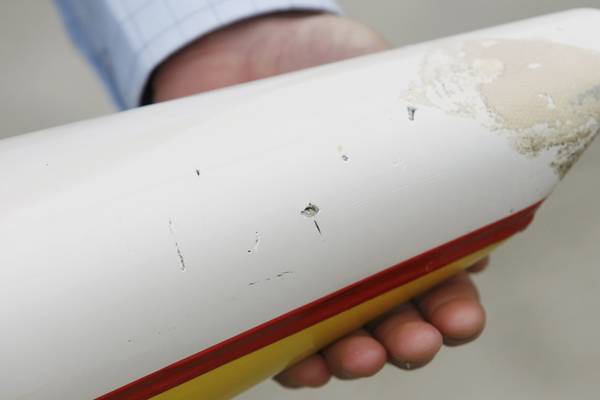 A NEWCASTLE ambulance officer was lucky to escape injury after being knocked from his ocean racing ski by a great white shark on Sunday.
Redhead Surf Lifesaving Club members Luke Nolan and Mark Ayre were paddling about one kilometre off Redhead, on their way to Newcastle Harbour about 2.30pm, when the two-metre juvenile great white struck.

Mr Ayre said he was paddling about 14km/h “chasing the swell”, when he felt an “enormous force hit the ski” and he was knocked into the water.

“I had no idea what direction it came from, I just looked across and saw the shark within two feet of me,” he said.

“It was very solid, it looked like a brute of a thing, and I literally jumped back on the ski like a perched cat on a couch.”

The shark attacked the back of the 5.7-metre ski leaving puncture marks.

Mr Ayre said after hitting the ski, the shark disappeared from sight and the pair continued their journey into Newcastle Harbour.

“It was rough and the swell was pretty big, besides the harbour there was nowhere else for us to come in at,” he said.

“I was lucky the ski only had a few puncture marks, by the time I got to Horseshoe Beach it had taken in about 10 or 12 litres of water.”

The 30-year-old former Newcastle City Council lifeguard said he had seen numerous sharks in the past, but nothing this “solid”.

“The force was indescribable, it was like being hit by a car,” he said.

“I could see the head of it on the back of the ski and the fin was where I was, I’m just so glad he mistimed the hit or I don’t know what would have happened.”

Mr Ayre said the near miss was not enough to keep him from the water.

“I’m down at the beach nearly every day and I don’t think I could keep away,” he said.

“I went out yesterday [Tuesday] and just on cue a dolphin popped up and it really got the heart started.”
http://www.theherald.com.au/