On 10-30-2012, approximately 12:00 p.m., Cal Fire received a 911 call from a citizen who advised a surfer had been bitten by a shark at the North Jetty while surfing. The citizen advised Cal Fire the surfer was being attended to by other surfers who were loading the seriously injured surfer into a black pickup truck and transporting the surfer to an area hospital. A Humboldt County Beach Patrol Deputy was patrolling the area about the same time and was flagged down by a citizen who asked the deputy if he was there for the shark attack. The deputy had not been dispatched yet to the scene and was unaware of the attack. The witness told the deputy the victim had already been transported. The deputy responded to the local hospital and met with the 25 year old adult male victim as he was going into surgery. The victim told the deputy he was bitten by a shark while surfing. The victim had an approximate 14 inch bite wound and other wounds on his body that required surgery.

Note by SYM:
This incident is the second shark attack in California in less than a week.
– Previous attack : Man reportedly dead in shark attack near Surf Beach. 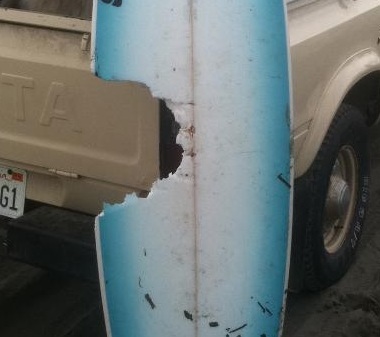