In the aftermath of the latest fatal shark attack in Reunion (here), about 300 people (most of them surfers) gathered in front of the Prefecture building in Saint-Denis early this afternoon.

The protesters demanded from the Prefect to implement measures that would prevent such tragic shark incidents from happening again.

“We made this gathering so that the prefecture is beginning to listen to us, and we can find solutions to the overpopulation of sharks,” said bodyboarder Amaury Lavernhe.

The ‘Océan Prévention Réunion’ Association (OPR) said about the protest: „… this is an important opportunity to voice our outrage and to demand that real steps are taken to stop this massacre (=fatal shark attack) “

More concretely, a delegation of ten people had the chance to meet Reunion’s Prefect, Michel Lalande, and asked him to open the Marine Reserve for shark-fishermen. It is believed that this nature reserve has become a kind of ‘pantry’ for Reunion’s sharks on the west coast. This has consequently led to an abundance of sharks and a higher risk of attacks in the region. Although there seems to be a lack of scientific evidences to support this conjecture. According to some local scientists, it appears to be a combination of factors that can explain these shark bite incidents.

Outside the Prefecture building, the protesters were shouting : ‘Open the Reserve now ‘.
After a minute of silence to honour the shark attack victims, numerous surfboards were laid in the garden of the Prefecture as a protest gesture. 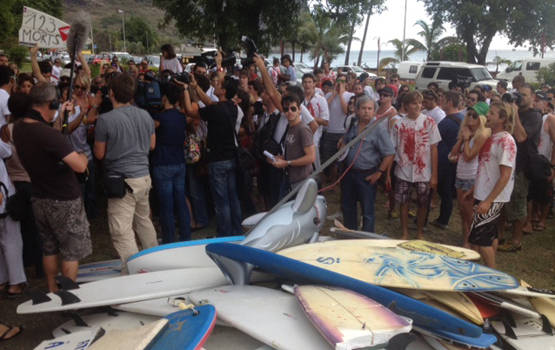