The South Peninsula Subcouncil (19) will shortly be considering a proposal to take the first steps to begin a trial of shark exclusion nets in the southern section of Fish Hoek beach. If the South Peninsula Subcouncil approves the proposals the City will then make an application to the National Department of Environmental Affairs for a research permit, allowing the trial to go ahead.

If the approvals application and the trial is successful, the exclusion net will offer a potential long term option for increased bather safety, at limited or no risk to the marine environment.
In considering the use of the exclusion nets the City needs to balance the impact on the local Fish Hoek community:

In 2006, the City contracted the KwaZulu-Natal Sharks Board to assess the potential of deploying an exclusion net at Fish Hoek Beach as a safety measure.

“At the time, it was recommended not to deploy an exclusion net. The potential for deployment of an exclusion net as additional bather safety measure now needs to be reconsidered,” said Alderman Belinda Walker, Mayoral Committee Member for Economic, Environmental & Spatial Planning.

An exclusion net is not the same as shark nets currently used in KwaZulu-Natal.

Exclusion nets are small meshed nets designed to act as a barrier to sharks preventing them from entering an enclosed area. In the proposed trial the area that would be protected would be kept to a minimum, but large enough to provide a recreational space and training area for the life-saving club. As such the area would be less than the size of two rugby fields and would run from just off Jaggers Walk on the south of the beach diagonally across to the Law Enforcement offices on the beach. The small mesh of the nets prevents capture or entanglement of marine species and the net acts only as a barrier.

Shark nets on the other hand are used along the KwaZulu-Natal coastline and are essentially fishing devices known as large meshed gill nets that entangle and catch sharks, reducing the local shark population and, by fishing for sharks within the vicinity of a protected beach, reducing the risk of shark attack. They cover large geographic areas and are further out at sea than exclusion nets. These nets are not species selective and hence also result in a range of other marine species becoming entangled.

“We will be proposing to the Subcouncil and ultimately Council that the exclusion net be deployed under a research permit, as this will provide the only realistic means of assessing the potential success of the net as a long term safety device. If it proves successful, bathers will be safer and the local economy would benefit,” said Ald Walker.

On completion of the trial, long term implementation would require prior Environmental Authorization in terms of the National Environmental Management Act.

The trial installation of an exclusion net within the confines of a research permit does not require public consultation. A public process will nonetheless be conducted for Interested and Affected Parties to raise issues for consideration in order that the City can get the best sense of the public’s needs.

The deployment of an exclusion net, both as a trial research project as well as a potentially permanent feature, will have capital and operational costs for the City. As part of the trial the City will be investigating possible funding options.

The concept of installing an exclusion net at Fish Hoek Beach is not without risk. But based on intensive research, the City believes that this course of action is possible and practical.
With the appropriate resources, training and daily management, the exclusion net would have minimal ecological impacts, would detract little from the sense of place of Fish Hoek Beach, would in relative terms be a cost effective option, and be in the public interest.

“It is likely to have significant social and economic benefits for the Fish Hoek area, and would meet the needs of the City’s perspective of implementing safety measures that meet the needs of our communities while not negatively impacting on our rich marine environment,” said Ald Walker.

If the proposal meets all of the necessary requirements the project is anticipated to be implemented on a trial basis in October 2012. 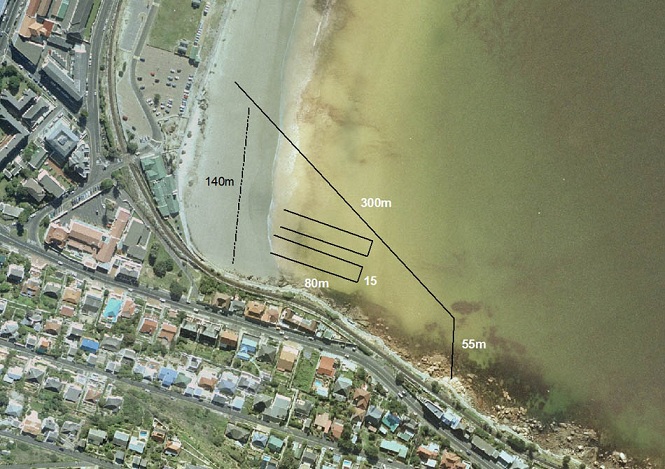