Man attacked by a shark in NSW

A man has had a close encounter with a shark in northern NSW.

Paramedics were called to a boat ramp at South West Rocks, north of Port Macquarie, about 4.50pm on Sunday after reports a man had been bitten by a shark, a spokesman for the Ambulance Service of NSW said.

The man told them he had been bitten by a grey nurse shark, and he was taken to hospital suffering small bite marks, the spokesman said.

A spokeswoman for Port Macquarie Base Hospital said the 31-year-old man was in a stable condition with minor injuries.

An employee at a local dive shop, who asked not to be named, said divers had told him the man was spearfishing at Green Island, just off shore.

“He had a dead fish strapped to him and a shark gave him a nudge,” he said.

“I think he was swimming around for a while.”

“He got nudged by a shark. He didn’t even require stitches.”

Inspector Cribb couldn’t say whether the man was a spear fisherman because police involvement was minimal.

Beaches in the area remain open, a spokeswoman for Kempsey Shire Council said. 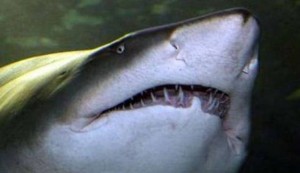