An 8-year-old Deltona girl and 56-year-old woman are recovering after being bitten by sharks in New Smyrna Beach on Sunday.

WFTV learned the girl was bitten on the calf and hand but was not seriously injured.

“She was brave,” said Capt. Jack Driskell of Volusia County Beach Patrol. “She didn’t want to go to the hospital. She wasn’t in pain. She said all the shark was doing was looking for food.”

In a second attack, a 56-year-old Orlando woman was bitten in the ankle in the same stretch of beach near the rock jetties of the Ponce Inlet, authorities said.

The woman’s injuries were also minor, but she and the girl both required stitches to treat the wounds.

Authorities said waves are churning up the bottom of the ocean, decreasing visibility, which could be leading to the bites.

Witnesses said the sharks appeared to be about 4 feet long. Both sharks grasped the victims in about 2 feet of water and then immediately released them.

On Monday, young beachgoer Matteo DiMarco said a shark had him running for dry land.

“I saw it swimming when I was boogie boarding out there,” DiMarco said. “I saw a shark swimming towards me.”

According to a report released by the University of Florida, there were 11 shark attacks in the state last year, the most for any state in the U.S. Six of those attacks were in Volusia County. 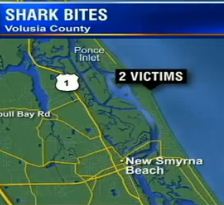