According to the information site clicanoo, a shark attack took place this morning at 10 am, about 3.7 km from Cap La Houssaye  in Saint-Paul.

The incident involved a man (aged 51) in a Hawaiian-style outrigger canoe (photo). He was not injured, but he fell into the water after the shark had succeeded in damaging the hull of the small canoe.

“When I found myself in the water, I did not know if the shark would come back again”, said the victim. But ten minutes later, a passing boat came to his aid.

Following this fifth shark attack in 2011, the mayor of Saint-Paul has issued an order to prohibit all water activities at the beach of Boucan, near the Rivière des Galets.

Note: A short time ago, a video has appeared in the internet, showing an encounter between a big hammerhead shark and an angler in a small vessel off St. Gilles, Reunion Island. You can see the video in our Video Section (here).

Update: The name of the canoeist is Jean-Pierre Castellani. The local media is reporting that he was attacked by a tiger shark, about 2.5 metres in length. 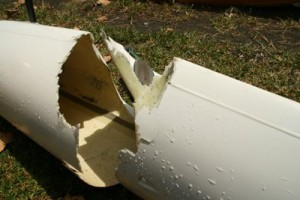