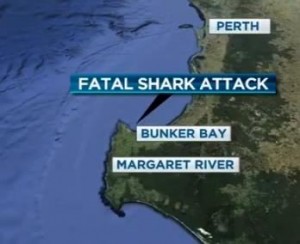 ‘ PerthNow ‘ is reporting that a  man has been killed by a shark while bodyboarding with a friend in south-west Western Australia this afternoon. The attack occurred at Sugarloaf Rock off Bunker Bay, about 250 kilometres south of Perth.

The area is a popular surfing and fishing spot known for dangerous rips and sharks.

Police media spokesman Graham Clifford said :“The deceased is a male in his early 20s. We believe we know who he is.”

PerthNow understands the man is originally from the eastern states.

According to Mr. Clifford, the victim was bodyboarding at the time with a mate and also three of four to five others were in the water at the time but unfortunately he was taken from the lower part of the body.

He said:“There was another 20 people in the water as well. There is a big seal colony around the corner, he might have been mistaken for one of them, it’s been known to happen.”

Mr. McLeay had managed the café for six years but this was the first major shark attack he was aware of in the area .

A Yallingup woman, who did not want to be named, was at the beach with her husband and two young girls when the attack happened.

She said two men ran along the beach yelling at people to get out of the water.

“We were just going for a walk along the beach for Father’s Day and two young blokes came running up to us trying to get people out,” she said.

“There were mainly surfers in the water and everyone cleared out pretty quickly. People were just in panic.

“They pulled him out of the water and there was a lot of blood on the beach. There was just no hope, he was cut in half.

“We go swimming here all the time and my husband surfs so it’s lucky he didn’t go out today. It’s very sad for this young bloke.”

In the moments after the attack, desperate onlookers ran to a nearby home to phone for police and ambulance.

The president said: “I have not had a briefing on it yet. I am sure that the (shire) rangers will contact me and I will discuss it with them. This is I guess nature at work, it’s a very popular surfing area. It is not and area where people just go to swim because the access is not straight forward…I guess the word is remote.”

The attack happened about an hour’s drive from Gracetown, where 31-year-old Nicholas Edwards was killed by a shark last year.