By: Helmut|Published on: May 27, 2014|Categories: Shark Attacks - Related Incidents| 0 comments

Eric Barnabé was bitten by a shark while spearfishing in the waters of Wallis, which is an island in the Pacific Ocean belonging to the French overseas collectivity of Wallis and Futuna.

The incident occurred in the morning of last Friday, 23. May 2014. Eric sustained injuries to his left lateral thigh.

The spearfisherman claims that he was attacked by a large grey reef shark Carcharhinus amblyrhynchos ( species name mentioned in French source: requin gris ) that measured about 3 metres in length.
Although the reported maximum size of this species is 2,55 metres, with most individuals being less than 2 metres in length. ” He attacked me by mistake and I will continue to love sharks”, Eric said. 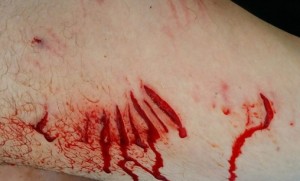