By: AlB|Published on: May 14, 2014|Categories: Shark Attacks - Related Incidents| 0 comments 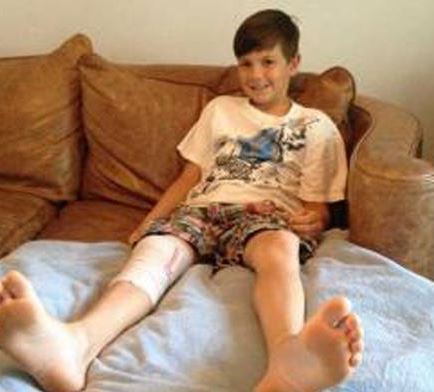 While surfing on the south end of Tybee Island, Raeshelle Meadows and her 12-year-old son, Ayden, spotted something gray in the water behind Ayden’s surfboard. They believed it was a shark, and before they could get out of the water, the animal had latched on to Ayden’s right leg.

“I had already caught two waves and I was getting ready to catch another one when we saw it,” said Ayden. “It was just like in the movies, it jumped up and hit my board then grabbed my leg.”

Meadows said she took Ayden to Memorial University Medical Center where the doctor on call speculated it was a shark bite, but was unable to confirm because he had never seen a shark bite before.

“I ran to the lifeguard stand and they wrapped it up and after we got to the other place the blood was already clotting so they told us to go to the hospital. The doctor said he believed it was a shark bite. You could see the outline of the jaw on his leg,” Meadows said.
Skip Sasser, the chief of the Tybee Island Fire and Emergency Services, said he was aware of the incident, but wasn’t able to confirm that the bite marks had come from a shark.

“I know the lifeguards wrapped the leg, but they couldn’t verify what bit the child. I think they were all scratching their heads because they didn’t know what it was,” Sasser said. “Certainly if it was confirmed to be a shark we want to know that.”

Ayden’s injury required 11 stitches, but an avid beach-goer, he said the experience won’t stop him from venturing into the water again.
“My adrenaline was so high I didn’t really feel it until I saw it,” he said. “It’s sore, but it’s still fine. It’s not going to stop me from going into the water at Tybee again.”