DELRAY, Fla. —Kurt Hoffman said he was bitten in the forearm by a shark Saturday morning while kite boarding in Delray.

“The shark came up and took a bite,” Hoffman said on his Facebook page. “It felt like a bear trap clinched on my forearm then released.”

Hoffman said he immediately pulled himself up onto the board and made his way to the beach.

Delray rescue workers and lifeguards helped Hoffman, who was taken to a hospital.

“At (the) hospital, they left (the wounds) open to seep because of the bacteria in sharks mouth,” Hoffman said.

He said the bite looked to be about 6 to 7 inches wide and there were about 15 to 20 cuts. 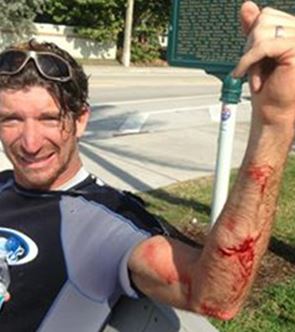