By: Helmut|Published on: May 26, 2014|Categories: Shark Attacks - Related Incidents| 0 comments

Optus has joined forces with technologists from Shark Mitigation Systems to embark on an R&D project to develop world-first shark detection technology to protect people and sharks throughout Australia and the world.

The ‘Clever Buoy’ uses sonar technology to detect shark-sized objects in coastal areas, in a non-invasive way. When a detection is made, the buoy will relay a signal via the Optus Network, to lifeguards on the beach.

Nathan Rosenberg, Head of Brand and Communications, Optus said: “We are very proud to be part of the development of a revolutionary product that has the potential to change the lives of beach-goers and protect sharks across the globe. Clever Buoy could change beach safety forever as we learn more about shark behaviour through a truly digital method of detection.

“This idea couldn’t have come to life without our brilliant Optus Network. It will play a key part in making sure Clever Buoy can reach its full potential and one day hopefully be everywhere for lifeguards as they take care of Australians while enjoying a day at the beach.”

The first stage of this R&D project is to trial the feasibility of the system. When detection is made by the Clever Buoy, Google Plus will be used to alert relevant audiences via the Optus Network.

The R&D project is a starting point for the future development of a ‘Clever Buoy’ which could be deployed by beaches across the world as a non-invasive method to detect sharks. If successful, the aim is for the Clever Buoys to be available for commercial purchase by mid-2015.

Traditionally, sonar has had limited success in being able to detect sharks. The Clever Buoy’s equipment utilises intuitive technology that can be programmed to learn the details of what it’s designed to detect. It differentiates between the length of an object and its propulsion through the water using sonar signatures. It has successfully identified sharks during testing phases in Sydney Aquarium and the Abrolhos Islands, situated off the west coast of Australia.

Hamish Jolly, Director of Shark Mitigation Systems said: “Very little is known about shark behaviour and we are continually striving to learn more about them. The reality is, there currently isn’t one perfect shark detection system. We wanted to develop a non-invasive shark-detection solution to improve our capacity to detect sharks off beaches which could be a big step in improving beach safety.” 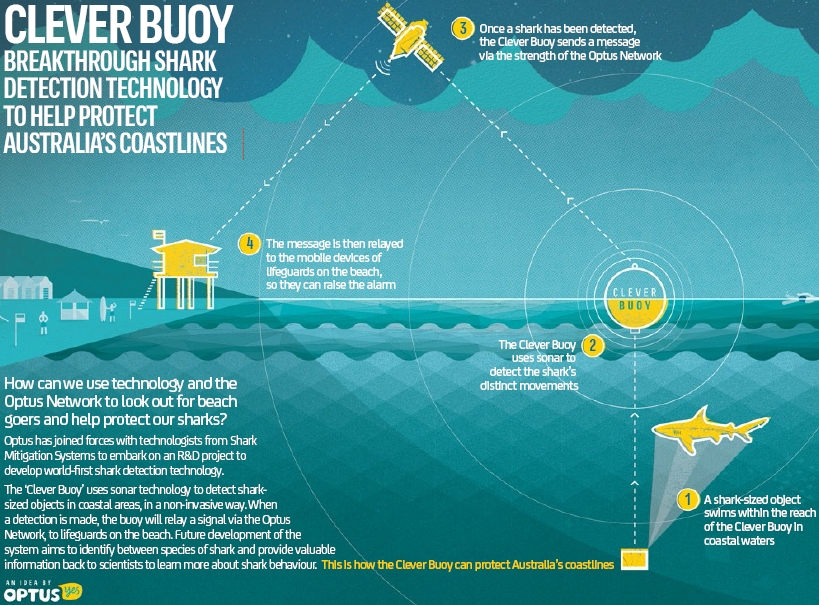 As the testing process progresses, the Clever Buoy will continue to adapt with increasing knowledge of the difference between a shark’s sonar signature and its swimming patterns and that of other sea life, producing appropriate alerts for lifeguards, via the Optus Network.

Future development of the system aims to identify between species of shark and provide valuable information back to scientists to learn more about shark behaviour.

To find out more about the project visit cleverbuoy.com.au.

Clever Buoy – Testing of the Sonar