In the early morning hours of last thursday, 11. September,
two large bull shark were taken by fishermen working for the ‘Cap Requin’- and ‘Valo Requins’-Program in Reunion Island. These programs have been introduced to test certain fishing methods (drumlines and longlines) in order to minimize the risk of shark incidents and to gather information for scientific research.
The ‘Valo Requins’-Program was formerly run under the name ‘ Ciguatera 2 ‘, and it examines the presence of ciguatera toxin in bull sharks (Carcharhinus leucas) and tiger sharks (Galeocerdo cuvier).
We already reported about this program in one of our previous articles, here.

The male bull sharks (other source: one male and one female) measured 2,90 and 2,60 metres in length
and both specimens were captured on drumlines in St. Paul Bay off the Island’s northwestern coast.
Only two days before, fishermen announced the capture of three tiger sharks. Two of them measured in at 3 metres and the other one was 2.50 metres in length. The three shark catches occurred within just 17 hours ( 08.-09. Sept ) in the waters of Saint-Paul Bay and Saint-Gilles. Official sources state that at least four of the five sharks have been contributed to the ciguatera study.

Since late January 2014, a total of 29 large sharks have been killed, consisting of 11 bull sharks and 18 tiger sharks which were between 2,10 and 4,00 metres long ( see table and map below ).
The fishing gears used for the shark mitigation measures are a number of drumlines and bottom-longlines which are baited with fish and then deployed mainly in the waters off the northwestern commune of Saint-Paul.
So, the fishing efforts are predominantly concentrated along a ca. 20 km stretch of coastline.
The targeted species are large bull sharks (Carcharhinus leucas) and tiger sharks (Galeocerdo cuvier).
Smaller specimens of these two species or other shark species are released alive after being tagged if possible. 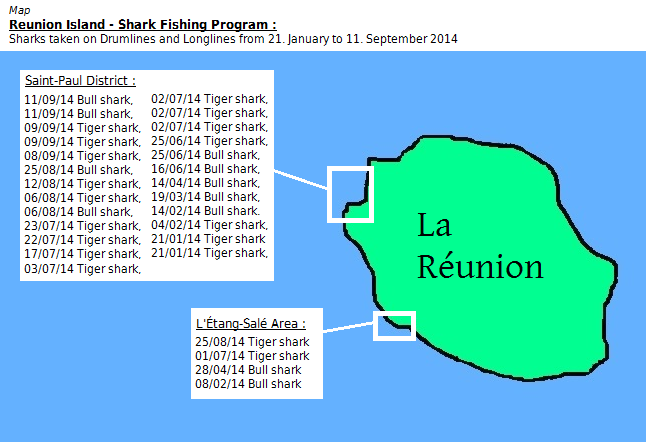 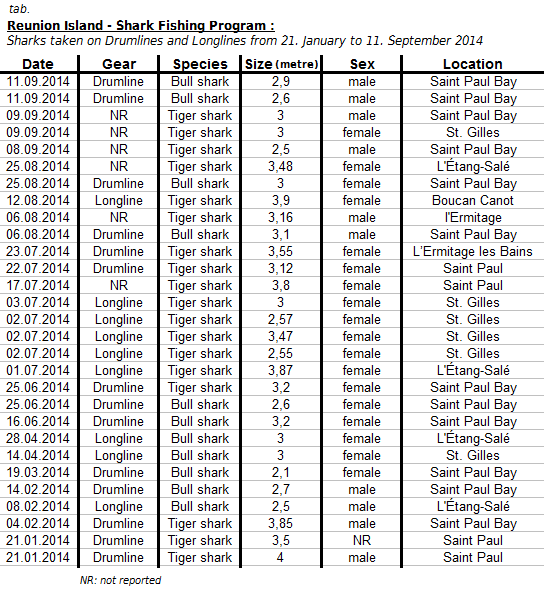