Dr. Espinola says that the man “was bitten by a shark and then drowned.”

He said the man’s upper left arm and both legs were missing. Part of his intestines were also missing. Because there was evidence of bleeding, Dr. Espinola concludes that the man was alive when he was attacked by a shark.

However he also concluded that the cause of death was drowning.

Guam Police Spokesman A.J. Balajadia confirms that the man has been identified as 40 year old Nae Deok Kim of Korea and he is the person reported missing by the PIC.

Kim was last seen Saturday morning. The PIC distributed leaflets with the man’s picture to fellow tourists on the beach in Tumon.

Two fishermen found the body Sunday morning off Asan Beach about 7:30am. The remains were floating in the water about 20 feet off-shore.

Dr. Espinola said he believes the man died sometime Saturday afternoon. He also said he could not perform a toxicology report because of the absence of urine in the remains. 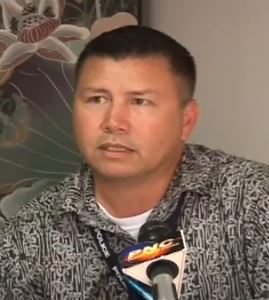