A man believed to be in his 40s was bitten by a tiger shark Wednesday evening while surfing in waters at Kiholo Bay.

Hawaii Fire Department Battalion Chief Steve Loyola said the man was bitten on his left forearm by a tiger shark around 6 p.m. He said the victim described the tiger shark as “big” and a “monster,” noting a length hadn’t been estimated, and the attack is not yet confirmed.

The man was transported to North Hawaii Community Hospital in stable condition. The hospital’s emergency room declined to provide any other details as of press time Wednesday.

Loyola said the state Department of Land and Natural Resources would likely make the call on any potential beach closures today.

In 2011, there were two reports of sharks biting boards, but not injuring the riders, near Lyman’s surf spot in Kailua-Kona.

Prior to that, an attack occurred in October 1999 when a 16-year-old boy had his arm bitten by a 6- to 8-foot shark while he was surfing shortly before sunset off Old Kona Airport Park, according to West Hawaii Today archives. An unconfirmed attack was also reported April 1987 in Kailua Bay and a confirmed attack occurred in 1963 off South Kona, according to the archives. 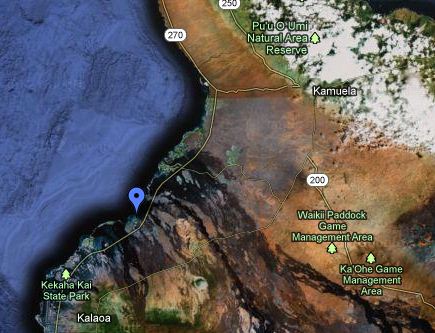