AN MTHATHA resident still cannot believe he is alive after being attacked by a shark at Port St Johns’ notorious Second Beach on Sunday. 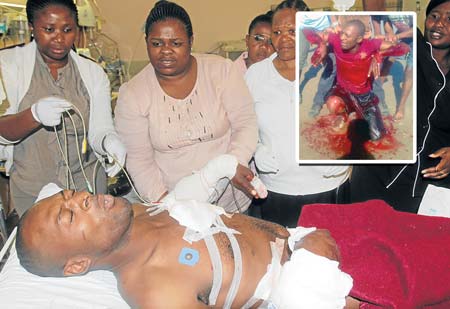 MIRACLE SURVIVOR: Fundile Nodumla is admitted at Nelson Mandela Academic Hospital in Mthatha after fighting off a shark with bare hands in the shallow water of Port St Johns Second Beach on Sunday. INSET: Nodumla after the attack. Picture: LULAMILE FENI

There were no lifeguards – or anyone else – to come to his rescue.

Fundile Nodumla, 39, fought off the shark with his bare hands in shallow water.

He was admitted at the Nelson Mandela Academic Hospital in Mthatha on Sunday evening.

Lifeguards who spoke to the Daily Dispatch drew a frightening picture of safety at Second Beach and spoke of how helpless lifeguards were as they did not have adequate equipment to ensure bathers’ safety.

They only work for two months a year. They confirmed there had been no lifeguards at the time of the attack, saying they last worked on January 15 and would only work again in mid-March.
They said the municipality had told them there was no money to pay them.

“We work in December, 15 days in January and then another 15 days between March and April.

“E ven if someone is attacked we can’t scare the shark off because we don’t have adequate equipment, even though this beach is regarded as one of the world’s deadliest,” said lifeguard Ndaba Mafutha.

“Even had we been on duty, we could not have saved him without adequate equipment .”

He said in-season there were normally eight guards at Second Beach.

“We have told the powers-that-be that the sea is not seasonal. We used to work six months a year, but it was cut down to two ,” he said.

Busubana was one of the people who rushed the injured Nodumla to hospital. “In fact the man saved himself . He fought as much as he could and left the water bleeding profusely,” said Busubana .

Health spokesman Sizwe Kupelo said Nodumla had injuries on both arms and his chest and abdomen.

Port St Johns mayor Mnyamezeli Mangqo said he was concerned about the shark attacks, and the municipality was in discussion with the KwaZulu-Natal Shark Board and environmental affairs department.

“This is no longer a Port St Johns issue but a national matter.

“We want shark nets and shark spotters,” he said .

On the issue of lifeguards, the mayor said the council had resolved to have lifeguards working for six months from December to June.

“Because of finances the municipality can only pay for 30 days a year, but we hope that negotiations with the government will see our beaches guarded for six months. I hope the recent incident will speed up the negotiations.”

Christmas Day festivities turned to terror at Second Beach about two months ago when 20-year-old Liya Sibili, of Gauteng, was attacked and killed by a shark at Second Beach.
There have been seven fatal attacks in as many years. —