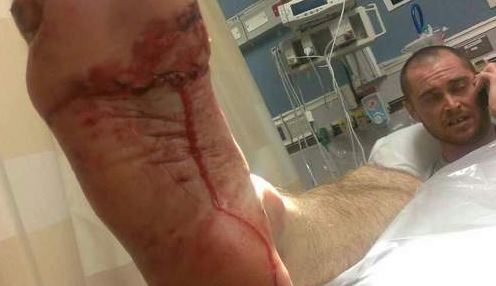 Bobby Baughman was trying out a new surfboard when something grabbed his foot.

He said he had been surfing near Cocoa Beach Pier this afternoon. He finished riding a wave, so he hopped off the board and dove underwater to let the next one pass over him. He kicked off the bottom, but then he felt something clamp on his right foot.

“It just locked down really hard like a crab would, but it had my whole foot,” he said.

His first instinct was to go limp, but as soon as he did, the creature started shaking him.

Baughman said he works on a fishing boat and has experience with these animals – he said it was a shark that bit him. It was 4 to 6 feet long, weighing 80 to 125 pounds.

“It was one of the bigger, huskier ones like a bull shark or a lemon shark,” he said. “It was as big as me.”

So he went into “fight mode.”

He reached down and dug his fingers into the animal’s face.

“I know they’re real sensitive up around their nose and stuff,” he said. He gripped the shark as tightly as it gripped him.

“When I squeezed down on him, he gave one final shake and let go,” Baughman said.

He scrambled away, hopped on his board and rode the next wave in on his belly. He looked back, holding his foot up in the air and could see red dripping down. As soon as he felt the board’s fins dragging in sand, lifeguards were there to help. They scooped him up and bandaged the wound. A friend drove him to a hospital.

“You could see it – the gash across the top of it. I could see some of the holes in the underside of my foot.”

Brevard County Ocean Rescue Chief Jeff Scabarozi confirmed that the bite came from a shark. He said they got the call at about 2 p.m.