A shark that attacked a diver off Australia’s south-western coast has been sentenced to death by the Department of Fisheries.

A catch and kill order was issued and staff have been sent to the dive area about 180km east of Esperance to deploy capture gear.

“The Department of Fisheries advise of a report of a diver injured in a non-fatal incident involving a shark 180km east of Esperance at Cape Arid,” a statement said.

“St John Ambulance and Police are attending. Fisheries and Marine Officers are also en-route with capture gear to deploy in the surrounding waters as soon as possible.  An order to catch and kill the shark has been issued by the Director General of the Department of Fisheries.”

Abalone diver Greg Pickering, 55, suffered “substantial injuries” when the shark bit him as he collected sea snails. He had been working for of Esperance-based Southern Wild Abalone when the attack took place.

Company manager Marcus Tromp told Australia’s Associated Press that Pickering was conscious but did not know details of his injuries.

The dive crew had departed from Poison Creek at Cape Arid National Park, a popular but remote spot for fishing.

“There has been some substantial injuries, like any encounter with a shark, but the details are quite sketchy,” Tromp said.

“He would have been preparing for his daily business and unfortunately this has occurred. I understood that he was still conscious and in good hands as far as first aid goes. All divers, especially at that age, have had a passion for the ocean for their entire life.”

Another dive crew working near Pickering witnessed the attack and helped rescue him.  According to the Esperance Express, Pickering is in a stable condition and is being taken to a hospital in Perth.

“The crew on the diver’s vessel would have been in shock, and I believe the diver was left on the vessel to keep the injuries stemmed, and the vessel was towed back to meet with the ambulance.”

A spokesman for Surf Life Saving said the coast off Esperance was dangerous for divers, as many big sharks are seen in the area on a regular basis. The species of shark is unknown, but both tiger sharks and great white sharks are known to the area.

There have also been unconfirmed reports from other divers that it was a great white shark.

This is the second time Pickering has been attacked by a shark. In 2004, he was attacked by a 1.5m bronze whaler shark while spearfishing off the coast of Cervantes, Western Australia.

In an interview with the Ten network, he said: “The shark just turned on me and charged at me and it latched onto my leg and it bit twice. It wasn’t excruciating pain, I was surprised.

“I could see there was a big chunk of skin hanging off and the wetsuit was sort of holding it together. If sharks are hungry they can snap. All can be calm and then they just explode into action.” 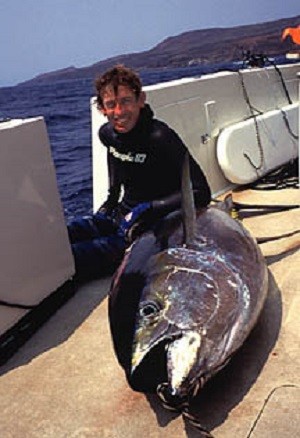