GULF SHORES, Alabama — A man was bitten on the leg by a shark while swimming in the Gulf of Mexico between Baldwin County 2 and the Gulf State Park Pier around mid-morning Wednesday, according to Grant Brown, the city’s director of cultural affairs and recreation. The unidentified swimmer was treated and released at South Baldwin Regional Medical Center in Foley.

“He was in waist-deep water and he saw the shark,” Brown said this morning. The wound looked like a cheese grater had been rubbed along his leg, he said. The man received stitches and antibiotics.

The purple flags — which warn swimmers of dangerous marine life — were posted after the incident, Brown said. The beaches were not closed.

“This was a random thing at this point,” Brown said.

Local lifeguards and Gulf Shores Fire and Rescue responded to the incident. 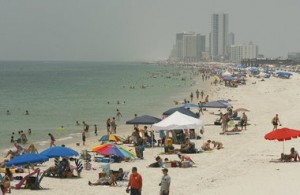 People soak up the sun on the beach around the Gulf State Park Pier during the Memorial Day weekend Saturday, May 26, 2012, in Gulf Shores, Ala. On Wednesday, Aug. 15, a man was bitten on the leg by a shark while swimming near the pier