7 killed by sharks in 7 years

CHRISTMAS Day festivities turned to terror at Port St Johns’s “beach of death” when 20-year-old
Liya Sibili, of Gauteng, was attacked and killed by a shark while swimming at the notorious
Second Beach.

Billed as the most dangerous beach in the world after seven fatal attacks in as many years,
swimmers were however back in the water within hours of the deadly attack – while rescuers still
searched for Sibili’s body.

A popular Christmas stomping ground for thousands of people, news of the attack and subsequent
swimming ban did not stop crowds from swarming into the tiny valley and beach to party it up –
often with a beer in one hand and braai tongs in the other – and cool off in the warm Indian
Ocean.

Several residents yesterday confirmed people were swimming well into the evening the day after
the attack, much to the concern of stretched lifeguards who worked until 8pm to try and ensure
their safety.

Talented Border surfer Avuyile Ndamase – who relocated to East London soon after watching
helplessly as his younger brother Zama was mauled to death by a shark in the bay last year –
yesterday recalled how he was playing volleyball on the crowded beach when he spotted the
shark swim between bathers. “People were trying to get out the water after the lifeguards spotted
something in the water. I saw the tail of something really big grab the boy, the water started boiling
and later it went red.”

Ndamase said after years of riding the waves in the tiny bay he had stopped swimming and
surfing there after the attack on his brother Zama. “After all the attacks we have had here over the
years, people are crazy to even go in the water.”

Second Beach lodge owner Mike Gatke – who started the acclaimed Ilitha surfing academy, but
closed it in 2009 after a spate of attacks – yesterday said under-equipped lifeguards were
extremely nervous to go into the water after witnessing the latest attack. “They are very scared.
There is no way they will go into the water if someone is attacked.”

Family spokesman and uncle warrant officer Sipho Mditshwa said Sibili’s mother, brother Andile
and other family members have received counselling. “She (mom) is coping better now. She has
been getting counselling from social workers,” Mditshwa said. Mditshwa said so far only a piece of
clothing had been recovered.

The search for Sibili’s body was called off yesterday 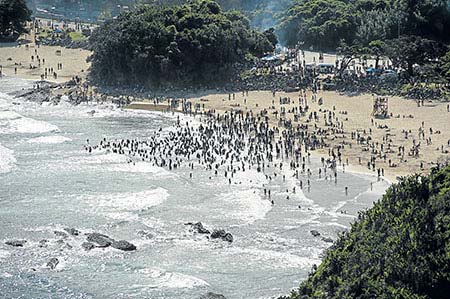 A busy Second Beach in Port St Johns shows bathers
in the water on December 26, 2012, the day after
yet another shark attack.