At about 9:00 a.m. in the morning of May 29, a fisherman lost almost his entire left forearm during a severe shark attack in the state of Guerrero, which is located on Mexico’s southern Pacific coast.

The victim, who was identified as Benigno Medina Navarrete (46), was diving (presumably free-diving) with his friend Juan Mendoza off the beach of Boca de la Leña in La Unión. The shark attack occurred shortly after the two fishermen succeeded to catch a fish just 15 metres from shore in a depth of ca. 5 metres.

Juan aided his injured companion to shore and took him to the Hospital General de Lázaro Cárdenas, where he arrived at about 1:00 p.m. and underwent a surgery that lasted for over three hours.

According to the source, an approximately 3-metres long bull shark (Carcharhinus leucas) was identified as the species involved in this incident.

Update: Please see the related news-video in our Video-Section ( here ). 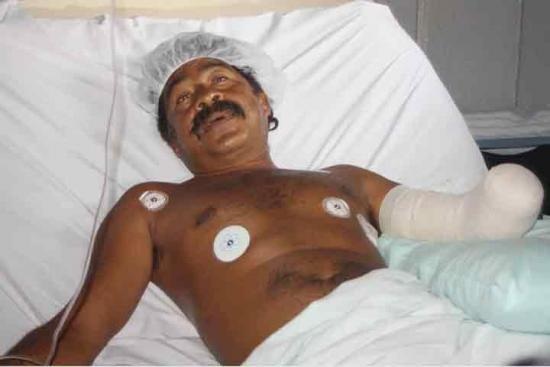