‘I thought I was going die’

Marcelino “Marc” Riglos was coming up for air while spearfishing in waters off of the Waiehu Golf Course on Sunday morning when he felt something near his fin.

Then he felt a bite on his ankle. 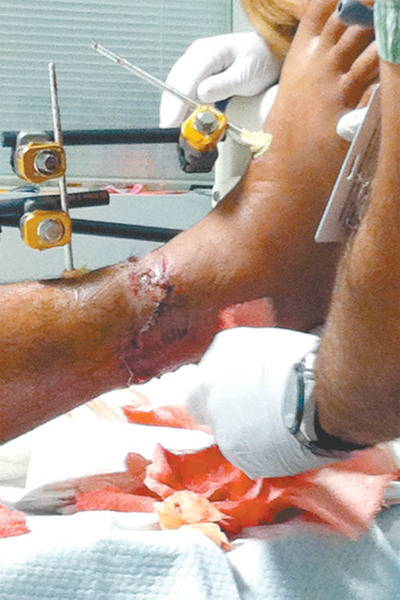 “I thought my friend was fooling around,” Riglos recalled Monday.

Then he saw what he believed to be a 12- to 15-foot tiger shark clamp down on his right ankle. The shark tugged at his ankle and jerked it from side to side.

“I started whacking it in the face with my hand,” the 30-year-old Kahului resident said. “My feet was dangling and blood was shooting all over the place.”

“I thought I was going die out there. (It) was crazy,” Riglos said via phone from his hospital bed at Maui Memorial Medical Center on Monday morning.

Riglos said he “screamed my guts out” calling for his dive partner Kaulana Kaaa, who was about 10 to 15 feet away from him in waters about 300 yards from shore. He recalled that the water was murky close to shore but clearer where they were.

The shark swam toward Kaaa after leaving Riglos, but when Kaaa pointed his spear gun at the shark, it backed off and swam away, said Riglos, who is an electrician at Hawaiian Commercial & Sugar Co.

With the help of Kaaa, a tourniquet was tied with dive gear to stop the bleeding, and Riglos was pulled back to shore. They shed their floaters and guns, which were later recovered, to make it easier to swim back to the beach.

Still, it took the men about 25 minutes to swim in.

The two men were participating in the 2012 Maui Roi Round-Up Tournament, an invasive species spearfishing competition aimed at trying to control three types of fish that were introduced to Hawaiian waters in the 1950s – roi, toau, and taape.

On Sunday after the attack at about 8 a.m., the state Department of Land and Natural Resources closed beaches in the area from Round Table in Waihee to the Paukukalo River mouth. After the Maui Fire Department’s Air One helicopter did a flyover inspection of the area at about 9 a.m. Monday and did not find any sharks or anything out of the ordinary, the beaches were reopened at 11 a.m., the DLNR said.

The attack on Riglos was the fourth shark attack or close encounter reported in less than a month that prompted Maui County Ocean Safety officials and DLNR officials to close Maui beaches. The incidents include:

* On Oct. 27, a 51-year-old California woman attacked by a shark at Makena Landing. The woman suffered puncture wounds to her right inner thigh and lacerations to the front and back of her right hand from pushing the shark away. The shark was estimated to be 10- to 12-feet long.

* On Oct. 22, a sea turtle attacked at Kanaha Beach Park. Bystanders estimated the shark was 10- to 12-feet long.

* On Oct. 20, a lifeguard, who was in the water at Makena State Park about 3 to 5 yards from shore, reporting being followed by a gray shark. He got out of the water safely.

* On Oct. 18, a 55-year-old Pukalani man having his standup paddle board bitten by a shark in an area called “Kite Beach” or Kaa Point in the Kanaha Beach Park area. The man was uninjured.

“There is no evidence that this is nothing other than coincidence,” said Russell Sparks, an education specialist with DLNR’s Division of Aquatic Resources.

He did note that the number of shark attacks in Hawaii seems to be more prolific during the fall into winter period compared to the summer months when more people are in the water.

He said he does not know the reason for the trend. Still, despite when they occur, the year usually ends with three to five shark attacks.

“It doesn’t appear to be any increase (now), or at least not substantially,” he said.

Kuhea Paracuelles of the Roi Round-up Committee said Monday that everyone at the tournament was saddened to hear about Riglos.

“It is hard to see a fellow diver go down,” she said.

“We all are very shocked, and this is such an unfortunate event. Divers expect this risk is there. (But) when it happens, it’s all very shocking. We are happy he’s going to be OK,” she added, noting that there are strict safety rules in the tournament.

For example, contestants need to dive with a partner and when one partner is diving in the ocean, the other one has his or her head above water. Paracuelles said that tournament officials also know where each of the tournament divers is at all times.

Proceeds from the tournament shirts, bags and other items sold from Sunday’s tournament will go to Riglos, she said.

Even leftover cases of water and soybeans from the tournament were sold to raise funds.

“Divers were left and right putting in money for Marc,” Paracuelles said.

On Sunday alone, divers donated $995. She said they plan on doing another fundraising event in the future.

Reflecting back on the incident, Riglos said he wasn’t panicking at first. Then he thought of his family, including his girlfriend Kari Rodrigues, who is pregnant.

He said he needed to survive.

“I’m hanging in there trying to be strong for him,” his girlfriend said Monday. “He’s strong though. I know he’ll get through it.”

For Riglos the experience was enough to say goodbye to the recreational activity.