A 38-year-old man is reportedly dead after what authorities are calling a likely shark attack at Vandenberg Air Force Base this morning.

Emergency crews responded to Surf Beach on the base this morning for a report of an unresponsive man.

Details are sketchy, but crews reportedly stopped administering CPR to the victim at the scene and the Santa Barbara County coroner’s vehicle arrived at the site after noon.

The attack originally was reported as occurring at Surf Beach, but apparently occurred north of there at adjacent Ocean Beach.

Master Sgt. John Peters, a Vandenberg spokesman, said earlier that the man is not believed to be affiliated with the base.

Although the beach is located on Vandenberg Air Force Base, Ocean is accessible to the public along with the adjacent Surf Beach.

Two years ago, a Santa Barbara college student died after being attacked in waters off Vandenberg’s Surf Beach by what’s believed to have been a great white shark.

Lucas M. Ransom, of Romoland, a city near Perris Valley in Riverside County, was in the water with a friend between 9 and 9:30 a.m. Oct. 22, 2010, when the attack occurred. The 19-year-old UCSB student was boogie boarding on the break line about 100 yards off Surf Beach.

At 10:58am on October 23, 2012, a 911 call came into the Sheriff’s dispatch center stating a man had been bit by a shark while surfing near Surf Beach in Lompoc. A friend, who was also surfing and witnessed the shark attack, swam over to assist the victim pulling him out of the ocean and onto the beach.  The victim’s friend started first aid procedures while another surfer called 911.  The Vandenberg Air Force Base Fire Department arrived and took over emergency procedures.  The male victim was pronounced dead at the scene by paramedics.

The type of shark involved and other details are under investigation at this point.  The name and age of the decedent is being withheld until the next of kin can be notified.

The decedent in this shark attack has been identified as 39 year old Francisco Javier Solorio Jr. (date of birth: 6-15-1973). The decedent is from Orcutt, California.  The initial investigation determined that the decedent was bitten by the shark in the upper torso area.  Three other male individuals were at Surf Beach at the time of the attack.

The shark in this tragic incident has been positively identified as a 15’ – 16’ foot Great White Shark.  Ralph Collier from the Shark Research Committee in Chatsworth, CA, made the determination today after examining the decedent’s body.  The decedent was bitten on the left side of his upper torso area.

The Solorio family does not want to be contacted and is asking for the media to please respect their privacy during this difficult time.

No other information on this case is being released by the Santa Barbara Sheriff’s Office. 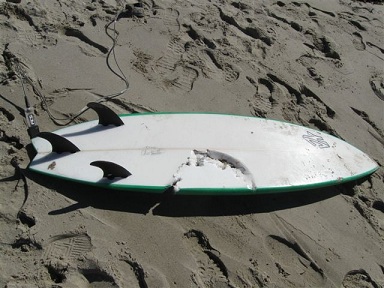