The shark attack twice and fled … 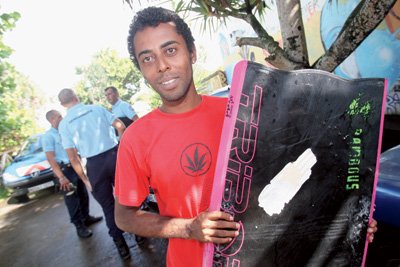 The board served as a shield under the feet of Gerard Itema (Richel Ponapin pictures)
itema-gerard.jpg (30.46 KiB) Viewed 2 times
The bite marks visible on his board bodyboard show the fate which Itema Gerard escaped. This Benedictine 31 years, experienced practitioner, escaped yesterday afternoon in a shark attack on the spot of the Bittern in Saint-Benoit. The third since 2006.
The ban is not a solutionMany `non-fatal attacks
“I was waiting for the last wave before leaving the water. It was 14 pm and my two comrades were already on shore. I was at 100 m from the edge, sitting on my board when I bodyboard felt two strong propulsion from below. I had the reflex to push the board to protect me. I thought I would not expect a third shock. Then I paddled like crazy to get to the seaside “.

Gerard Itema escaped unharmed, but had the fright of his life yesterday by discovering the damage to his equipment: a bite mark in the middle of the plate shows that the shark tore a piece. Around this “white gash about a foot, visible in the middle of bodyboarding black” (see photo), there are also many signs of incisions hinting at the jawline of the shark. Fortunately, bodyboarding – which served as a shield under his feet – was stiff enough not to yield to the attack of the shark. “Everything happened very quickly. In a few seconds. I have not had time to be afraid of the blow. But I must admit that every time you take your board, you think of danger and attacks. It is fully aware, “he says. His dalons Gourama and Vincent Olivier Payet attended the scene immediately without realizing the danger. “Gerard has not cried. He has not called for help but when I saw him swim with all his might to the edge, I thought something was happening. We then threw stones more far to attract the beast in the other direction. It was obviously ready to get back into the water and the rescue at any time, “reflects Oliver Gourama in shock too. Minutes after the attack, the police arrived on the scene. Young bodyboarders reported their mishap stating they “were training at Bittern, as part of the preparation of Manapany Surf Festival scheduled for April. Usually we train on the spot of the station but now the water is too dirty. ” The two previous shark attacks at St. Benedict were at the heart conversations. “The first was on the spot of the station on March 27, 2006: Rémi Lorion escaped with a large gash in the quadriceps. And the second, 27 March 2010, at Bittern. Shorebreak said Olivier Ferrère s is defended with his board. I attended a few minutes after the release of water from Olivier “, says Gerard Itema … author of the famous pictures of the board of shredded Shorebreak 2 years ago less than 12 days. A March already ■

http://www.clicanoo.re/
This is a online translation.
We thank pierre kouadria for sharing the information