Introduction
At approximately 12:30 on Thursday, 19 April 2012, a 20 year old male, Mr David Lilienfeld was bitten by a Great White Shark at a popular surfing area known as “Caves” at Kogel Bay. The victim suffered the loss of his right leg and died in the water. Mr Lilienfeld was a member of the South African Bodyboarding Team.

The purpose of the review is to:

Shark Attack Details
The following account of the events leading up to the attack, the attack itself, as well as the emergency response has been compiled based on interviews conducted on 19 April 2012 with all relevant parties and eye-witnesses.

Although the accounts from various witnesses vary to some degree, as is to be expected following a traumatic event, the following can be considered an accurate description of the events leading up to the fatal attack, as well as the emergency response thereafter.

“Caves’” is a popular surfing area on the Northern-most end of Kogel Bay. It is a small cove located under steep cliffs, closest to the Gordon’s Bay side of the bay.

An eye witness, Mr Matt Marais, recorded that just prior to the attack he was surfing alone at the Caves. After he left the water two body-boarders paddled out to a distance of between 70 – 100m from the shore. Minutes after leaving the water he heard shouting and saw a body-boarder being attacked by a large shark. The eye witness recalled that a single shark attacked the body-boarder. Reports indicate that:

Emergency Response
The first emergency calls were received at 12.40pm. At 13:00, the NSRI arrived on scene by road and air and reported that the victim’s body was on the rocks at the base of the cliff. The NSRI took control of retrieving the body of the victim, as per standard protocol. The NSRI dispatched one of their vessels, as well as a helicopter, to assist. Due to the difficult location of the victim’s body and the proximity of the cliffs, the medevac helicopter was unable to retrieve the body and returned to base. At this point both the skipper of the vessel, as well as the helicopter pilot, reported the presence of two white sharks in the area.

At 15.10 pm, the victim’s body was recovered from the rocks by ground personnel and carried up to the road. The victim’s father and brother were on scene throughout the recovery of the body.

Once the team had been notified and dispatched, ERMD then notified the Sport, Recreation and Amenities (SRA) Department at 13:18 and requested that SRA assist in closing the beach to swimming with the assistance of their District Staff. SRA immediately arranged for the closing of the beach, and also confirmed the closure.
A media release was issued informing the public. The Department of Environmental Affairs Oceans and Coasts Branch was also notified.

The White Shark Flag, indicating a closed beach due to shark activity, was raised at the main gate at Kogel Bay Resort, where visitors were advised of the beach closure at 14:45. A shark spotter was deployed to the “Cave” beach area and remained on site to actively inform the public. The shark spotter retuned to the “Cave” beach area on the morning of 20 April 2012 to continue ensuring beach closure.

Environmental Conditions
At the time of the attack, seas were calm with a 3-4 foot swell running, the water was “green and clear as described by the witness,” water temperature was 19 degrees, the sky was cloudless and the wind was mild south-easterly breeze. The eye witness also reported that just before the attack, a pod of 30 dolphins had moved through the area, as well as the presence of a number of actively feeding birds. At the time of the attack only the two body-boarders were in the water.

General Information
The area in which the shark attack took place is well known for White Shark presence, especially at this time of the year. Sightings of White Sharks by surfers at “Caves” and Kogel Bay are regularly received by the City’s Environmental Resource Management Department, as well as the Shark Spotters website. A breaching shark was reported two weeks ago and ERMD have also received reports of sardine activity.

Further unconfirmed reports from construction workers who were in the area indicate that two White Sharks had been seen in the area an hour before the attack.

A non-fatal white shark attack occurred at the same area in July 1999 (prior to City actively keeping records).

In 2006, the City and the Shark Spotting Programme initiated a trial of shark spotting at “Caves”. This was unsuccessful as the logistics of deploying shark spotters to an area without public transport access, or within reasonable cycling or walking distance of a major centre, resulted in the trial being suspended.

Shark Signage
The City has deployed Shark Smart information signs across its coastline in 2010. These signs have been installed at all nodal points. Site inspection on the 19 April 2012 confirmed that a Shark Smart sign is present and visible at Kogel Bay Resort. However, no sign is present at the access point to the Caves surfing area which is on the northern end of the bay.

Conclusion
1. Could the attack have been avoided within reasonable means?

In considering the above, the following should be noted:

Considering all the above, it is the view of this report that the fatal shark attack could not have been avoided within reasonable means. Cape Town is a city of 3,5 million people residing along a coastline which forms the natural habitat for White Sharks. An unfortunate, tragic and regrettable result of this will be that, on occasion, shark attacks will occur.

Ocearch / Sharkmen Research and Documentary:
Although the City had no role in the issuing of the Ocearch / Sharkmen permit, and did not participate in the programme, it does, however, hold the view that all relevant scientific protocols, safety considerations and permit requirements were adequately considered by the authorities with the aid of expert input, prior to issuing the permit to operate in False Bay. In addition, the City was allowed on board as an external independent observer on Sunday, 15 April and reported the following:

The following critical point needs to be stated. During the attack the sharks dorsal fin broke the surface (as reported by the eye witness Mr Marais). If this shark had been one of the tagged sharks, the satellite transmitter would have given off a signal that would have been recorded on the system and located the shark at Kogel Bay. On assessing the data, no satellite records exist for that area. Two of the sharks tagged in False Bay have given off signals and were located in the Macassar/Strandfontein area shortly before the attack. The lack of satellite signal is clear information that the shark involved in the attack is not one of the sharks tagged by the Ocearch Research Programme.

Further, with regard to public speculation of the role of chum, the following should be noted. White sharks occur in False Bay in healthy numbers throughout the year. The small and limited chumming by Ocearch would not have attracted additional sharks to False Bay as the amount of chum used is insignificant in comparison to natural chum sources in the bay including the natural chum slick emanating from Seal Island, fishing activities in False Bay, by-products from Kalk Bay harbour as well as the small and immaterial chumming by permitted cage divers. Furthermore, the Ocearch Programme operated in False Bay at Seal Island on Sunday and Monday. The wind direction has been strong south east throughout the week. Any residual chum from their activities would have dissipated within hours and, due to the wind direction, moved from the island in an opposite direction to that of Kogel Bay.

As a result, there is no evidence or reason to suggest that the tagging of four White Sharks over a period of 24 hours from Sunday 15 April to Monday 16 April, in False Bay, by the Ocearch Programme had any role to play in the tragic events that occurred at Caves.

Although the City has, and continues to have, no role in the Ocearch Programme, as well as not feeling that it is appropriate, or required, to defend or support the programme, it holds the view that it is essential that the correct and factual information be provided to the public. Public and media speculation linking the two unrelated activities is uninformed and misleading. 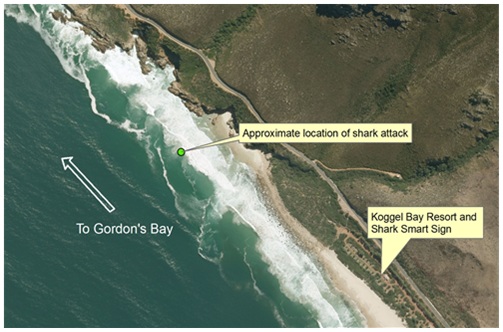