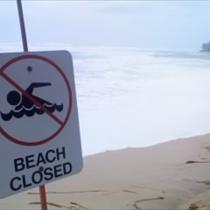 The beaches surrounding Makena Landing Beach Park were closed off Saturday afternoon following a shark attack on a 51-year-old woman from California.

The victim was approximately 20 yards offshore when she was attacked by a shark estimated to be between 10 and 12 feet long, said Fire Services Chief Lee Mainaga.

The woman suffered nonlife-threatening injuries, including puncture wounds to her right inner thigh and lacerations to the front and back of her right hand from pushing the shark away, Mainaga said.

She was transported to Maui Memorial Medical Center in stable condition.

Ocean Safety crews had closed the beaches one mile to the north and south of the attack site, from Maluaka Beach to Changs Beach.

The beaches were expected to remain closed until first light today, when the situation would be re-evaluated, according to Maui County spokesman Rod Antone.

The species of the shark was unknown as of Saturday night.