Surfer attacked by shark off Marina beach in California 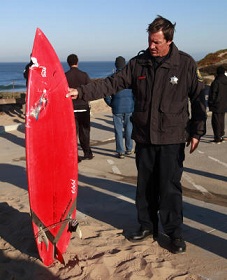 A Monterey man suffered multiple injuries Saturday morning when he was attacked by a shark while surfing at Marina State Beach.

Eric Tarantino, 27, was bitten on the neck and right forearm by a shark that took a 19-inch chunk from his red surfboard. The attack occurred shortly after 7 a.m., about 10 minutes after he and a friend, Brandon McKibben of Salinas, had entered the water.

With help from McKibben, Tarantino managed to get out of the water, then climbed to the parking lot on his own power, where a half-dozen or more fellow surfers used beach towels to apply a tourniquet to his arm and staunch the bleeding from his neck.

Paramedics arrived just minutes later and treated Tarantino at the scene before transporting him to Marina Municipal Airport, from which he was airlifted to San Jose Regional Medical Center.

Dana M. Jones, Monterey Sector Superintendent for the California Department of Parks and Recreation, said his injuries did not appear to be life threatening.

Jones said signs will be posted along beaches from Fort Ord to Moss Landing advising of shark danger, recommending that beach-goers refrain from any water activities over the next seven days. The sand portion of the beaches will remain open, and the the waters will be observed in the coming days for additional shark activity, Jones said.