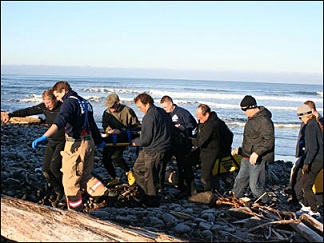 SEASIDE, Ore. – A female surfer was attacked by a shark Tuesday on the Oregon coast near Seaside, witnesses said.

The Seaside Signal reported the woman was attacked while she was surfing and other surfers who heard her struggling in the water helped her to shore.

“There was a big splash. I saw that. And then the stand-up paddler paddled over and got her on his board,” said witness Johnny Rodgers. “They paddled north a ways and then they came in where they could be washed in.”

The woman, who has not been identified, was taken to a hospital with a bite to the leg.

“She has some injuries to her lower leg. A couple of puncture marks,” said Captain Joey Daniels with Seaside Fire and Rescue.

Her condition is unclear. Her surfboard also had puncture marks on it.

“I saw the board. There’s a chunk out of it and there’s a little blood on the board,” said witness Scott Earling.

“Something definitely took a chunk out of that board.”

Seaside Fire Chief Dale Kamrath told KATU News they have not confirmed the woman was bitten by a shark.

Recently, a man was not hurt during a shark attack on the Oregon coast in October.